India   All India  21 Feb 2019  Intentions might be different but tone of Congress and Imran Khan is same: Prasad
India, All India

Intentions might be different but tone of Congress and Imran Khan is same: Prasad

There would have been celebrations in Pakistan as our leading opposition party has said same things as Pakistan PM, said RS Prasad. 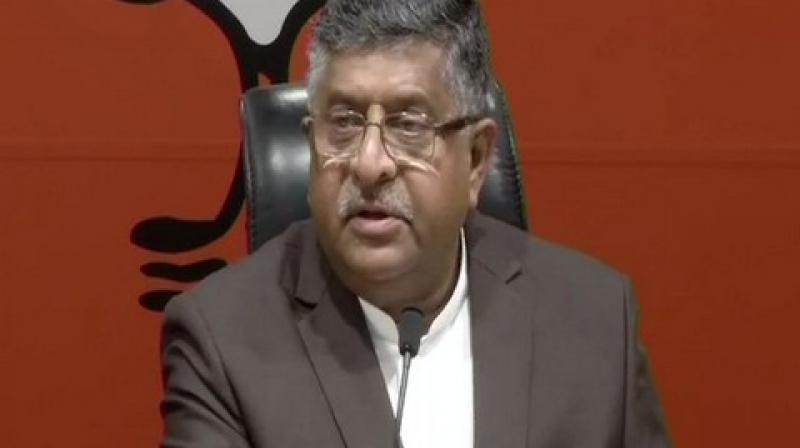 RS Prasad speaking to media on Thursday. 'All ministers including myself had gone to visit the families of those who lost their lives in the Pulwama attack. But, it is our firm belief that the country should not stop progressing and there should be no halt in any developmental work,' said Union Minister RS Prasad. (Photo: ANI)

New Delhi: Hours after Congress attacked Prime Minister Narendra Modi, the government hit back alleging that the party has taken the same line as Pakistan Prime Minister Imran Khan and was trying to weaken the morale of the country.

"Intentions might be different but the tone of Imran Khan and the Congress spokespersons was the same. Today, there would have been celebrations in Pakistan as our leading opposition party has said the same things as their Prime Minister," said Union Minister Ravi Shankar Prasad while addressing the media on Thursday.

Sharpening his attack at the Congress party, Prasad added, "When the whole country is one, when country after country is passing resolutions condemning the Pulwama attack and standing firmly with India, at such a critical moment, the true face of Congress party appears, seeking to weaken the morale of the country."
The minister also accused the Congress party of not taking a firm stand when Election Commission of India was being questioned by a man in London.

"Rahul Gandhi asks for evidence of the surgical strikes but does not ask for any evidence when a man of questionable character in London, in the presence of Kapil Sibal, questions India's elections. What can we expect from them?" he added.

Lauding his government, the minister told the media that from 2015 to 2018, 728 terrorists have been killed and also claimed that it is the current government which has broken the backbone of terrorism.

"There is a basic difference in our thought process and that of the Congress. All ministers including myself had gone to visit the families of those who lost their lives in the Pulwama attack. But, it is our firm belief that the country should not stop progressing and there should be no halt in any developmental work," stated the minister.

Terror attacks should not be politicised, said Prasad. “When the body of martyrs came to Delhi, Rahul Gandhi was caught on camera doing something with his phone. Did we make that an issue? We could have done if we wanted to,” said Prasad.

Earlier in the day, Congress party had accused Prime Minister Narendra Modi of not giving “due importance” to the Pulwama terror attack and shooting for a film at a time the entire nation was mourning the killing of 40 CRPF soldiers.

“Congress has used this attack for their political interests. They created an issue of the PM Modi’s presence in a programme on the day of the attack. They should know that PM Modi works for 18 hours in a day for the nation,” BJP president Amit Shah said at a public rally in Andhra Pradesh’s Rajahmundry.

More than 40 CRPF personnel were killed on February 14 after a suicide bomber Adil Ahmad Dar rammed a car laden with explosives into their convoy in Awantipora area of Pulwama in Kashmir. Pakistan-based terror group Jaish-e-Mohammad (JeM) claimed responsibility for the attack.