In Delhi, Saudis back India’s line on terror

India has always maintained it is open to a dialogue with Pakistan but only in an atmosphere free from terror. 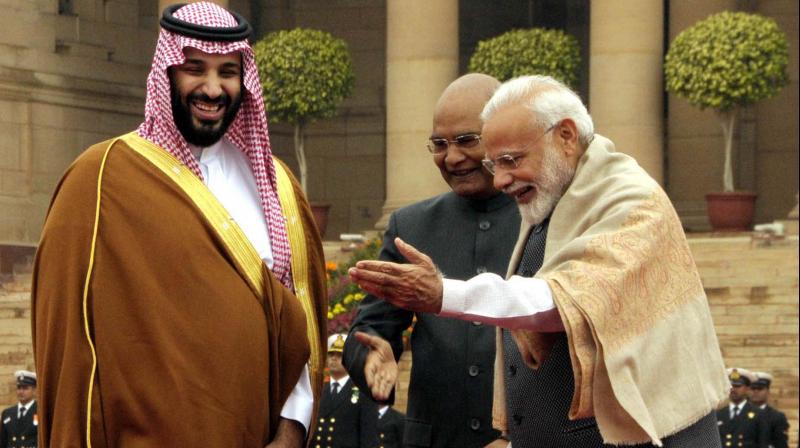 New Delhi: Jointly condemning the recent Pulwama terror attack on Indian forces in the “strongest terms”, India and Saudi Arabia on Wednesday, without naming Pakistan, “called on all states to reject the use of terrorism against other countries, dismantle terrorism infrastructures and to cut off any kind of support and financing to the terrorists perpetrating terrorism from all territories against other states”. Importantly, the two sides also “underlined the importance of comprehensive sanctioning of terrorists and their organisations by the UN”, in what seems a veiled reference to Pakistan-based Jaish-e-Mohammed chief Masood Azhar. This came as India clearly conveyed to Saudi Arabia Pakistan’s complicity in the Pulwama terror attack during talks at Hyderabad House here between Prime Minister Narendra Modi and visiting Saudi Crown Prince Mohammed bin Salman. Both sides also “called up on all countries to renounce the use of terrorism as an instrument of state policy”.

Pakistan, however, found mention in the joint statement in a different context, with New Delhi and Riyadh agreeing “on the need for creation of conditions necessary for resumption of the comprehensive dialogue between India and Pakistan”. It also mentioned that the Saudi Crown Prince “appreciated consistent efforts made by PM Modi since May 2014, including the Prime Minister’s personal initiatives to have friendly relations with Pakistan”, a clear reference to Mr Modi’s invitation to then Pakistan PM Nawaz Sharif to attend his swearing-in in May 2014, and also PM Modi’s brief visit to Pakistan in December 2015. India has always maintained it is open to a dialogue with Pakistan but only in an atmosphere free from terror.

The joint statement, which was delayed by several hours and eventually released late Wednesday night, sparking much speculation, also mentioned that Mr Modi “welcomed the announcement” of the Saudi Crown Prince “to invest in the areas of energy, refining, petrochemicals, infrastructure, agriculture, minerals and mining, manufacturing, education and health potentially worth in excess of $100 billion”. After a request from Mr Modi, Saudi Arabia also decided to increase the quota for Indian Haj pilgrims to two lakhs from the current 1.75 lakh pilgrims. Riyadh also ordered the release of 850 Indian prisoners lodged in Saudi jails. The two sides also inked five pacts in the spheres of investment, tourism, housing and broadcasting and also decided to establish a Strategic Partnership Council, besides instituting a comprehensive security dialogue at the NSA-level as well as setting up a “Joint Working Group on Counter-Terrorism”.

“Recognising the importance of the energy security as a key pillar of the strategic partnership”, the two sides “acknowledged Saudi Arabia as the world’s most reliable supplier of oil & gas and the key supplier to India”. The two sides will also carry out joint naval exercises in a strengthening of their defence ties.

Incidentally, the Saudi view on sanctioning of terrorists — which is being seen in the context of Pakistan-based terror outfit JeM’s chief Masood Azhar — is being seen as a softening of stance, especially after an earlier joint statement between Pakistan and Saudi Arabia that had called for avoiding “politicisation” of the UN listing regime at a time when New Delhi was stepping up efforts to get Azhar banned by the UN. Pakistan is a close friend of Saudi Arabia. In an interview to PTI, meanwhile, Saudi foreign minister Adel bin Ahmed Al-Jubeir said any terrorist or anyone who supports and finances terrorism must be proscribed by the UN, even as he rejected suggestions that Riyadh was opposed to India’s efforts to get Azhar banned by the world body.

Speaking in the presence of the Saudi Crown Prince without naming Pakistan, Mr Modi said: “Last week’s barbaric Pulwama attack was a symbol of the shadow of the inhuman danger hovering over the world. To deal with the scourge, we have agreed that there was a need to ramp up pressure on countries extending any sort of support to terrorism. It is necessary to put a stop to support to terrorism and destroy the infrastructure of terrorism  and to punish terrorists and those supporting them.” On his part, Saudi Crown Prince Salman said: “As far as terrorism and extremism are concerned — which are common concerns — I want to tell India that we will extend all cooperation to you — be it intelligence-sharing... not only with India but also with neighbouring countries. We will work together so that we can ensure a bright future for the generations to come.”

The joint statement issued by the two sides said: “The Prime Minister and His Royal Highness condemned in the strongest terms the recent terrorist attack on Indian security forces on 14 February 2019 in Pulwama in Jammu & Kashmir. Both sides called on all states to reject the use of terrorism against other countries; dismantle terrorism infrastructures where they happen to exist and to cut off any kind of support and financing to the terrorists perpetrating terrorism from all territories against other states; and bring perpetrators of acts of terrorism to justice.”

It added: “The two sides also noted the need for concerted action by the international community against terrorism including through early adoption of the UN Comprehensive Convention on International Terrorism and underlined the importance of comprehensive sanctioning of terrorists and their organisations by the UN... Both sides called up on all countries to renounce the use of terrorism as an instrument of state policy.”

On economic ties in the field of energy, the two sides “agreed to transform the buyer-seller relationship in the energy-sector to strategic partnership focusing on investment and joint ventures in petrochemical complexes”. The two sides also “expressed satisfaction at the first Joint Venture West Coast Refinery and Petrochemical Project estimated to cost $44 billion and both sides agreed to expedite the implementation of the project, which will be the largest greenfield refinery in the world to be implemented in one phase. In addition, $10 billion through the Public Investment Fund and its technology partners, and other investments opportunities potentially worth $26 billion being explored.”

On investment opportunities, Saudi Crown Prince Salman said: “We understand that there are opportunities for more than $100 billion investment in India... We want to strengthen investment and economic ties to ensure useful returns for both countries.” The five pacts included an MoU on “investing in the National Investment and Infrastructure Fund between the Government of the Republic of India and the Government of the Kingdom of Saudi Arabia” and a “Framework Cooperation Programme between Invest India of the Republic of India and Saudi Arabian General Investment Authority of the Kingdom of Saudi Arabia on Enhancing Bilateral Investment Relations”.