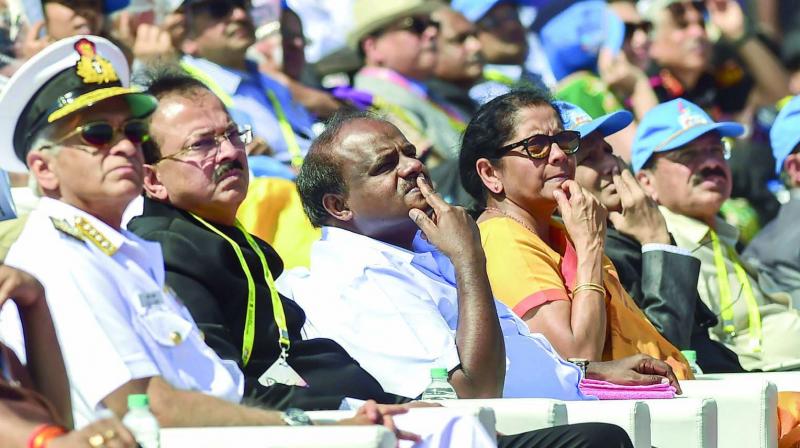 Bengaluru: Chief of the Air Staff Air Chief Marshal Birender Singh Dhanoa sang paeans in praise of home produced “Tejas” combat jets as he received the  “release to service” certificate — which means the fighter got the final operational clearance (FOC) —from Defence Research and Development Organi-sation (DRDO) whose facility, the Aeronautical Development Agency (ADA) designed and developed the aircraft.

The IAF Chief also indicated that he would take the first step at inducting 83 of these combat jets worth a whopping `50,000 crores, a move which would bring much relief to Hindustan Aeronautics Ltd (HAL), which manufactures them.

Answering a question on whether Tejas military jet was combat ready, Air Chief Marshal Dhanoa said: “Didn’t you see them perform at Vayu shakti,” inferring that the Tejas was ready. “It’s a major milestone today that we have got the FOC of the LCA MK 1. Like I had told you, the proof of the pudding is in eating. You saw how much the aircraft could fly and the number of sorties it could generate during Gagan Shakti, which was in April 2018. And during Vayu Shakti, we showed you how accurately this aircraft could dispense weapons on the target. So that is the proof,” he said, adding the Tejas could not only sustain a very high sortie rate but could also carry out very accurate weapon delivery.

“Because it’s a fighter plane, it has to behave like a fighter, and it did well in both air-to-air and air-to-ground mode,” he said.

The IAF has placed orders for 40 Tejas aircraft so far, of which HAL has rolled out 14 and the IAF has accepted ten. The planes are in service and are being operated by IAF’s Squadron Number 45 — the Flying Daggers — from the air force base in Sulur, Tamil Nadu.

While the initial 20 aircraft are in the initial operational clearance (IOC) configuration, the remaining of this first batch of aircraft ordered by IAF will be built as per FOC standards. HAL has already commenced work on the FOC standard aircraft late last year.

The IAF Chief said the RFP or request for proposal for 83 ‘Tejas’ jets would be issued soon to augment the IAF’s squadron strength.

“The RFP is going to be issued soon, for the production to continue. Not only will the IAF buy the Tejas Mk-1A but also the MK2,” he added.

The price of each combat jet, however, has not been decided as the cost committee is still reviewing HAL’s offer after which the price would be announced.