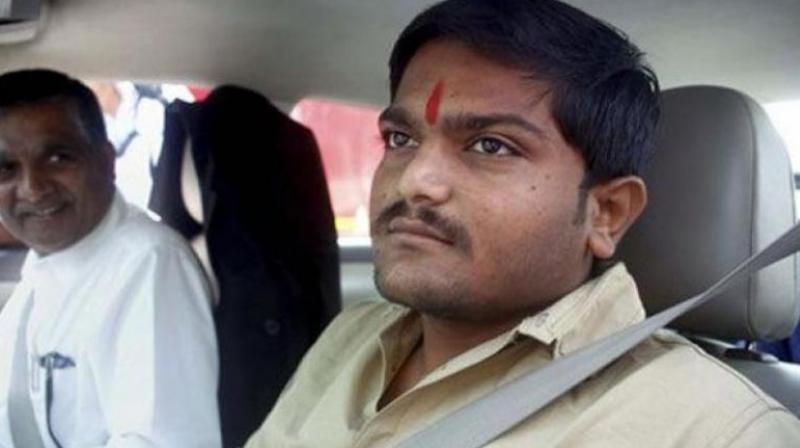 Hardik Patel, who is the convener of the Patidar Anamat Andolan Samiti, had moved his plea in an Ahmedabad court seeking discharge in the case. (Photo: PTI/FIle)

Ahmedabad: A court on Wednesday rejected Patidar leader Hardik Patel's discharge application in a sedition case filed against him by the Ahmedabad crime branch in connection with the violence during an agitation by his outfit in August 2015.

The Patidar Anamat Andolan Samiti (PAAS) leader is currently out on bail granted to him by the high court in June 2016.

The court accepted the prosecution's plea that there are material evidence against Patel on the basis of which charges can be framed.

The court said that evidence against the accused in the form of speeches, conversations and forensic evidence establish that Hardik Patel and two others -- Dinesh Bambhania and Chirag Patel -- had hatched a conspiracy and used pressure and threat to force the government to accept their demands.

The court also considered the deposition made by another co-accused-turned-approver, Ketan Patel, as evidence against the accused and said that a case was made out against Hardik Patel, Dinesh Bambhania and Chirag Patel for conspiracy to overawe the state or central government, by means of criminal force or the show of criminal force, sedition, and criminal conspiracy.

Hardik Patel, who is the convener of PAAS, had moved his plea in an Ahmedabad court seeking discharge in the case on the ground that there was no evidence against him for framing of charges and that the prosecution case against him did not hold ground.

He has been accused of inciting violence with intention to dislodge the government after a rally addressed by him turned violent in August 2015. At least 13 people had died in the violence.

The high court had earlier dismissed Hardik Patel's petition seeking quashing of the FIR in the same case. He had then moved the Supreme Court against the High Court order.

Patel was granted bail by the high court in June 2016.

On January 18, 2016, the city crime branch had filed a charge sheet of around 2,700 pages against Hardik Patel, Dinesh Bambhania, Ketan Patel and Chirag Patel. They were charged with sedition and criminal conspiracy.

The high court had also upheld sedition charges against Hardik Patel while asking the police to scrap charges of promoting enmity between the two communities or groups as his speeches for Patidars do not refer to hostility.

If convicted, the maximum punishment for the charges is life imprisonment.

In the charge sheet, the police had termed the quota agitation spearheaded by Hardik Patel, as a "pre-planned conspiracy" that was hatched to put pressure on the state government to accept their "unconstitutional demand of quota".