Counsel argued that this religious practice is not a discrimination against women. 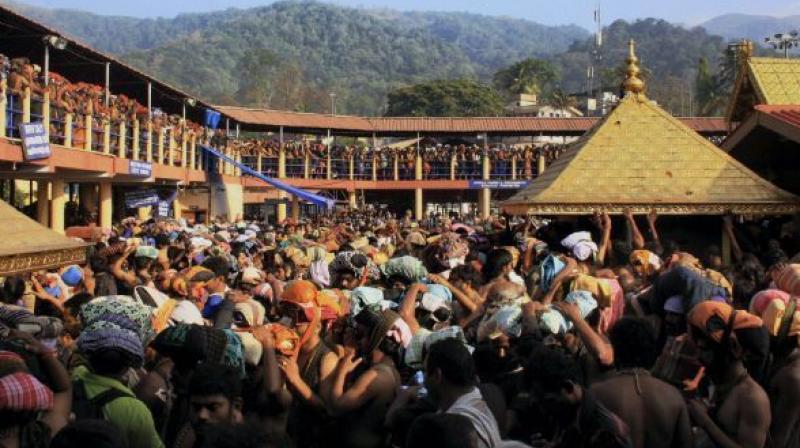 At the outset Justice Misra said the court will have to balance the rights, viz the right of denomination or cult to deny entry to women of particular age and the rights of those women who are excluded claiming right of entry into the temple.

New Delhi: The SC on Monday indicated that the issue of allowing entry of women in the age group of 10 to 50 to Sabarimala temple in Kerala will have to be heard by a five-judge Constitution Bench. Giving this indication, a three-judge bench of Justices Dipak Misra Ms R. Banumathi and Ashok Bhushan reserved verdict on a batch of petition seeking a direction to lift the ban on entry of women in the age group of 10 to 50 in Sabarimala temple. It asked counsel for parties to give written submissions within a week on the various issues that are to be adjudicated by a five-judge bench to enable the bench to pass appropriate orders, thereafter.

At the outset Justice Misra said the court will have to balance the rights, viz the right of denomination or cult to deny entry to women of particular age and the rights of those women who are excluded claiming right of entry into the temple.

Whether the state can change its stand when there is change of government is also an issue to be considered, the bench added. Earlier senior counsel K.K. Venugopal appearing for the Travancore Dewaswom Board  justified the regulation/restriction on entry of women in the age group of 10 and 50 years on the ground that the deity Lord Ayyapa is a Naisthik Brahmachari’ (celebate) and said the 1,000 year old custom and religious practice cannot be interfered with.

He said for several centuries, traditionally it has been a practice in the temple located in a forest notified area to restrict the entry of women who are in the age group of 10-50 years as the deity Lord Ayyappa did not want the penance to be disturbed.

When the Lord himself says don’t allow access to women in the age of 10 and 50, how can the court go into that question. The court will be going great injustice to millions of devotees, if it interferes and will set a precedent which will seriously affect other religious institutions, argued Mr. Venugopal.

Counsel argued that this religious practice is not a discrimination against women. In all other Ayyappa temples in Kerala or other parts of the country and abroad, women are allowed entry without any discrimination. He said Article 25 of the Constitution gives the right to the temple to manage its own affairs. He urged the court to refer the matter to a five-judge Constitution Bench as important questions of law relating to Articles 14, 21, 25 and 26 required interpretation, which can be done only by a larger bench.

Senior counsel K. Radhakrishnan, submitted that he was appearing for the King of Pandalam, whose foster son was Lord Ayyappa and he should be heard before any order was passed.

Counsel for the petitioners submitted that the custom that restricts entry of women violates the right of women to equality and non-discrimination guaranteed under Article 14 and Article 15 and 25 of the Constitution and is not protected by Article 26. Article 14 of the Constitution mandates that the State shall not deny to any person equality before the law or equal protection of laws.

Senior counsel Jaideep Gupta, appearing for Kerala government informed the  Bench that women of all ages should be allowed entry and worship at Sabarimala Ayyappa temple without any restriction. He said that the Kerala government was sticking to its 2007 stand when it filed an affidavit seeking removal of the ban on entry of women in the age group of 10 and 50.