It said that this is the first government which passes the laws first and then seeks support for it from the public. 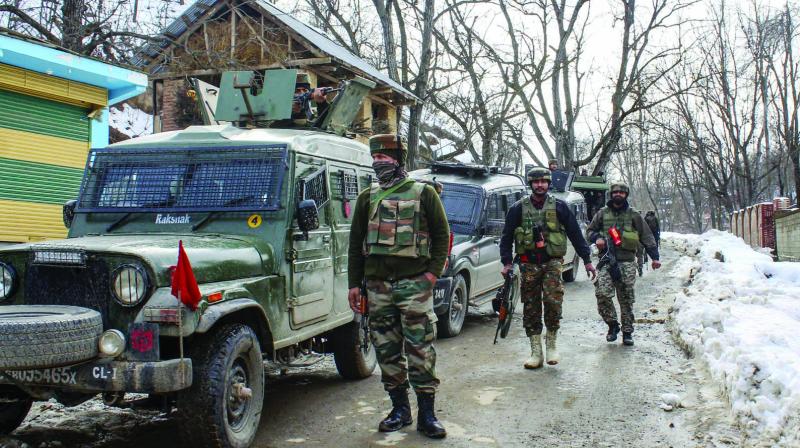 Army soldiers at Wani in Shopian district of south Kashmir during an encounter in which top three miltant commanders were killed on Monday. (Photo: PTI )

SRINAGAR: Seven of the 10 districts of the Valley are being ignored by a team of 36 Union ministers during their “extensive” tour of Jammu and Kashmir which it began at the weekend.

The authorities say that the purpose of the week-long visit of the ministers is to “disseminate the information about the importance of the government policies with regard to overall development of the Union Territory (UT) and its people along with steps taken in this direction in the last five months.” However, none of these ministers will be visiting seven districts of the Valley, including Kupwara, Bandipore, Budgam, Pulwama, Anantnag, Shopian and Kulgam. They would also bypass, at least, two districts of the UT’s Jammu region — namely Doda and Kishtwar. Jammu region too has 10 districts.

Srinagar, Baramulla and Ganderbal are the only three districts of the Valley being visited by Union ministers Mukhtar Abbas Naqvi, Ravi Shankar Prasad, Ramesh Pokhriyal “Nishank”, G. Kishan Reddy and Shripad Naik between January 20 and 24.

A spokesman of the J&K government said that the visiting ministers, during their “extensive” tour, holding close to 60 meetings across the UT to interact  with the people besides inaugurate a host of projects and works — from tube wells and lane drain protection walls to a two-lane bypass road and a school of engineering. The tour is being coordinated by the Union home ministry.

J&K’s chief secretary, B.V.R. Subrahmanyam said that the visiting ministers will educate people about the schemes and projects being implemented or to be implemented by their ministries in the UT.

The outreach programme covers five themes viz rapid development after J&K was brought under President’s rule in June 2018 and bifurcated into two UTs on August 5, 2019, cent percent coverage of 55 beneficiary oriented schemes to all residents of the UT, rapid infrastructure development including implementation of Prime Minister’s Development Programme, flagship schemes and iconic projects, good governance and rule of law with equality of opportunity to all and rapid industrial and economic growth in all sectors wit focus on incomes and employment, he said.

“The Union ministers will visit the districts under the public outreach programme with an objective of disseminating information about the importance of Centrally-sponsored schemes in overall development of every part of J&K,” he added.

The Congress has criticised the Centre’s decision to send its ministers to J&K, asking what was the need to send “propagandists” if everything was “normal” there and wondered when would opposition leaders be allowed?. It said that this is the first government which passes the laws first and then seeks support for it from the public.

“BJP government, in another propaganda exercise, has decided its time to explain the benefits of revoking Article 370 to Kashmiris. This is the first government that passes laws and then seeks support for it. When will the opposition leaders be allowed to visit Kashmir,” the Congress asked in a tweet on its official handle last week.

However, Prime Minister, Narendra Modi on Friday told the Council of Ministers that those of its members visiting J&K should refrain from over political messaging and focus on connecting with the people to “make up for lost time”.

According to a media report emanating from Delhi, he also asked the ministers to stay in the villages they visit at night rather than return to Jammu or Srinagar. He said that there should not be any political colour to the visit and that the idea should not be to do politics but to connect with the people — youth, teachers, government officers — and try to win them over.