PM says those rejected in elections are spreading on CAA. 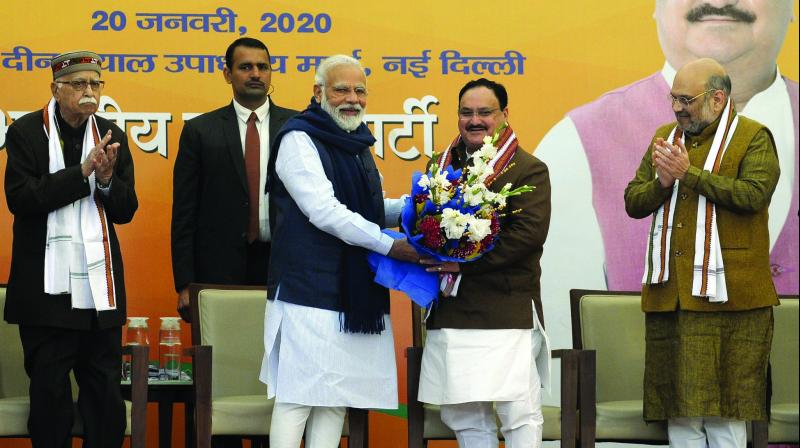 New Delhi: The BJP on Monday got its 11th national president in senior leader and former Union minister J.P. Nadda whose leadership Prime Minister Narendra Modi said will give the organisation “new energy, hope, and inspiration.” As the new BJP president, Mr Nadda thanked the organisation and the cadre and asserted that he “will work day and night along with all the party workers to take the party to new heights.”

Congratulating Mr Nadda, who succeed Amit Shah during whose tenure the BJP “scaled glorious heights”, the Prime Minister recalled how the BJP’s foundation was built on “sangathan aur sangarsh (organisation and hardship)” and used the occasion to ent-huse the party cadre and blamed the Opposition for the widespread anti-CAA protests. Though the PM did not name anyone, he slammed the Opposition parties and the “ecosystem” supporting them and asserted that despite attempts to “spread confusion and lies,” people’s faith in the BJP and his government have remains “unshaken.”

Mr Modi said the Opposition’s problem is not that the BJP was making any mistake but that people continue to bless it.

“Ours is not some temporary party or political arrangement... Inspired by our ideals, we have been working for years and we will keep working in the years to come. There are some people who dislike the very principles which guide us... That is why, there are attempts to create problems. For them, the problem is that the people of India are with us... These are the same people rejected by the people of India... Those rejected by the people have limited means but one of them is to spread falsehoods. They have a full eco-system for that... BJP cadre have always drawn their strength from the people of India. We do not need to seek validation from an eco-system that will never accept us,” said Mr Modi and added that the party will face more challenges in the coming days than what it did while in the Opposition and asked BJP workers to reach out to the public more actively.

After being elected unanimously as the new BJP president, Mr Nadda said the BJP’s target will be to come to power in the states where the party has not yet registered electoral success. Mr Nadda claimed that not only is the BJP different in its principles, but the “results of those principles are different as well.”

Hundreds of BJP workers and supporters, many of whom had come from Mr Nadda’s family home state, Himachal Pradesh, had gathered at the BJP headquarters. Many folk dancers from the hill state were also seen performing outside the party office to congratulate the new BJP president.

Thanking the BJP leadership and the cadre for his nomination, Mr Nadda said, “Today we are the world’s largest party that is in power in India. We have the highest number of MPs and MLAs in the country. We are not going to stop at this. There are some states left and we have set our aim there. We will make sure we reach to them as well.”

Earlier, the PM recalled how he and Mr Nadda used to travel together on scooter when Mr Modi was in charge of the state and described the new party president as an “old colleague.” Mr Modi also said that Mr Nadda is as much from Bihar, where he was born, as he is from Himachal Pradesh, his family’s native state, and both the states are feeling proud that he is leading the BJP.

Earlier, Union home minister Amit Shah said the BJP stands apart in India because it does not function on casteism or nepotism.

“If you look at other parties, every party is family-based and is promoting their own people... Only BJP promotes every worker based on sheer quality and love for motherland,” said Mr Shah.