Nadda was Modi and RSS’ first choice to succeed Amit Shah because he is the man who has never been heard saying ‘ye nahin ho sakta’. 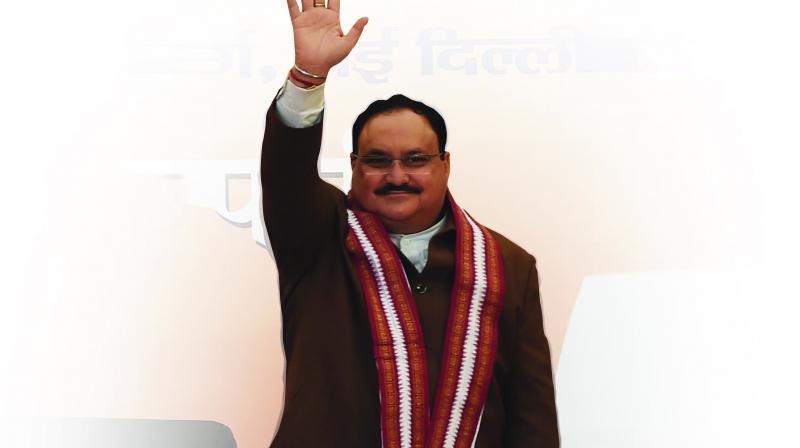 Affable, an organisation man, committed to ideology and a leader with a smile — this is how many describe 59-year-old Jagat Prakash Nadda, who succeeded Amit Shah as the president of the “world’s largest political party” at a time when the Bharatiya Janata Party’s electoral graph seems to be on a decline.

That Mr Nadda would succeed Mr Shah was indicated by the party top brass when he was promoted as the BJP’s working president when the later became Union home minister.

With the BJP, as an organisation, at its best position ever since Narendra Modi came to power at the Centre and Amit Shah taking the reins of the party, Mr Nadda — with his organisational skill and experience — is expected to add to the BJP’s forward march.

Associated with the Rashtriya Swayamsevak Sangh (RSS) since his college days, Mr Nadda is taking over the reins of the BJP when elections in the national capital are just days away and opinion polls are favouring Arvind Kejriwal-led Aam Admi Party (AAP) to retain power.

While the BJP has been dominating the Delhi’s municipal corporation for many years now, the party has been out of power in Delhi for more than two decades.

Perhaps sensing the difficulties his party is likely to face in Delhi elections and also the fact that its state unit is not famous for being a cohesive unit, Mr Nadda has been visiting each Assembly seat and reaching out to the cadre — the party’s backbone — and trying to enthuse them.

Whichever way Delhi goes, other challenges lie ahead for Mr Nadda as two crucial states are set to go to polls — Bihar by the end of this year and West Bengal next year.

While in Bihar, the state where Mr Nadda was born, the BJP has already declared that its ally JD(U) chief  Nitish Kumar will continue to be the face of the ruling alliance, in West Bengal it will be seen whether the Mamata Banerjee-led TMC continues to be the favourite or the BJP’s assertion of being the “best alternative” finds takers.

However, before all this, Mr Nadda’s team will be in focus and all eyes will be on who all are accommodated and whether he relies on the old faces in the existing team or goes for an overhaul.

When Mr Shah had taken over the party’s reins, among his top priorities was strengthening state units and organisations and the results were seen when the BJP won one state after the other. Mr Shah made it a point to visit each and every state unit, interact with the cadre and get a firsthand view of the problems ailing the party.

Being a close confidante of Mr Shah, the new BJP chief has been assisting his predecessor in most of these tasks.

Said to be the first choice of Mr Modi and also the RSS to succeed Mr Shah, Mr Nadda is known as a leader whose “face never shows disappointment or anger.” Those associated with him since his university days recall how he would be the first one to reach out to any student in problem and would never shy away from taking up issues that concerned students.

Mr Nadda is often given credit for the RSS affiliated youth wing, Akhil Bhartiya Vidhayrthi Parishad (ABVP), making inroads in the once Left-dominated Himachal Pradesh University (HPU). He was HPU’s first students’ union president from the ABVP. Mr Nadda was associated with the ABVP from the late 70’s when he got elected as the secretary of the Patna University.

He was born in Patna where his father was the vice-chancellor of the Patna University and shifted to Himachal Pradesh in the 1980s. Those associated with him since the HPU days recall another quality of his — that he remembers the name of each and every vidyarthi parishad member who worked along with him, as well as the BJP cadre.

“We have never heard him saying ‘ye nahin ho sakta’. He has a positive attitude no matter how big the problem is. And one of his best qualities is that he remembers the name of each and every karyakarta or sangathan member he meets,” recalls Swatantra Sankhyan, who has been associated with Mr Nadda since their university days.

A former Union health minister, Mr Nadda was one of the key strategists for the 2014 and 2019 Lok Sabha elections and was also given the charge in 2019 general polls of Uttar Pradesh, a politically crucial state where the party maintained its dominance and dented the poll prospects of regional satraps — the SP and BSP — once considered arch rivals who were forced to join hands to take on the BJP-led NDA. He was then the national general secretary in Mr Shah’s team.

Mr Nadda first came to political limelight during the Kandror agitation in Himachal Pradesh, to demand Plus II education in government higher secondary schools. His stint as state minister is known for promoting medicinal plants and herbs and how he provided medical facilities to far flung areas of the hilly state. As the forest minister, Mr Nadda launched state forest police stations to check forest crimes, massive plantation drives and creating awareness about setting up forest ponds.