India   All India  21 Jan 2019  Shivraj Chouhan at crossroads of his 3-decade-long political innings in MP
India, All India

BJP legislature party leader post given to ex-CM’s rival in a signal that his career in state affairs is nearing an end. 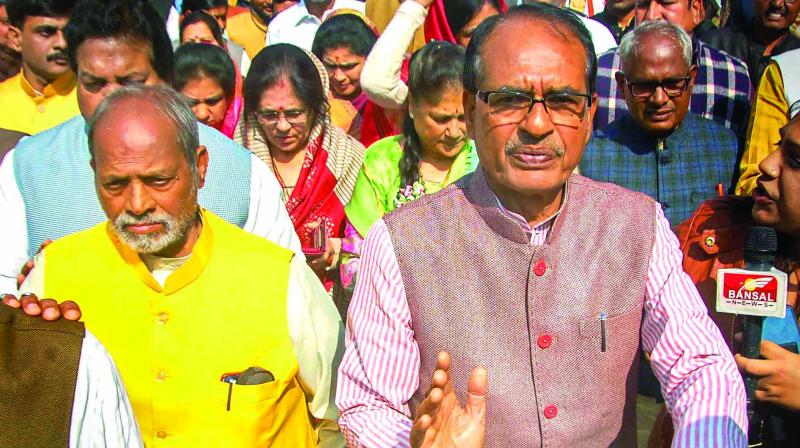 A file photo of former Madhya Pradesh chief minister Shivraj Singh Chouhan with BJP MLAs walking out of the Assembly and marching towards Raj Bhavan to submit a memorandum to the governor over the issue of Speaker’s election during the Winter Session of the House in Bhopal.

Bhopal: The so-called rehabilitation of former Madhya Pradesh chief minister Shivraj Singh Chouhan in BJP’s organisational set up  as national vice-president after he lost power in the Assembly elections has signalled the end of the road for him in state politics.

Veteran of seven parliamentary and six Assembly elections, Mr Chouhan got a hint that he may be shunted out of the state when the party’s Central leadership nixed his plan to go on a tour across the state to thank the people who backed BJP in the elections a week after he was ousted from power in MP.

He however tried to dig in his heels by setting out on a journey across the state by train to send a message to the party leadership that he still commanded mass followings and is the only vote-catcher in the state.

“I will serve people of the state till my last breath,” he spoke his mind when he found himself at the crossroads of his nearly three-decade-old electoral career following his loss of power in the state.

Authoritative sources in the party said Mr Chouhan had unsuccessfully lobbied through a Union minister said to be close to the Central party leadership to become BJP legislature Party leader to retain his hold over the party in the state.

However, the post has gone to senior BJP leader Gopal Bhargav, considered his arch rival.He later had also made a bid to replace the state party president R. K. Singh.

Mr Singh has found himself on a slippery ground after BJP fared badly in Mahakoshal region in the November Assembly elections. The Jabalpur MP hails from the region.

However, Mr Chouhan’s recent appointment as national vice-president of the party has clearly charted out his future role in Central politics, thus shunting him out of state politics.

“There are three decision-making authorities in the party in the state. They are state party president, leader of legislature party and state organising secretary (representative of RSS).

Other leaders who are in the core committee merely play the role of advisors.

“Mr Chouhan may at best be a core committee member in state party in future, not more than that,” a powerful Central BJP leader told this newspaper unwilling to be quoted.

Describing Mr Chouhan’s chances of returning to state politics as remote, another senior saffron leader quipped, “In BJP, an ex-CM always remains an ex-CM. The only ‘one-time’ exception to BJP’s unwritten policy in this regard is former Rajasthan chief minister Vasundara Raje Scindia.”

Mr Chouhan’s relevance in state politics may last till the upcoming Lok Sabha elections due in April, he assessed.

“He shares the credit for getting the party tantalisingly close to retaining power for the fourth term in a row in the state in the November Assembly elections in MP. He still enjoys mass followings in the state and hence is still a force to be reckoned with in the state. He will play a key role for the party in the upcoming parliamentary elections,” he added.

“My primary job now is to get maximum seats possible for the party in MP in the ensuing parliamentary elections. I have a national role to play for the party too,” Mr Chouhan said after he was appointed national vice-president of BJP.

Union minister Uma Bharti had led BJP to sweep Assembly elections in MP in 2003. In a dramatic turn of events a year later, she had to step down from office following an arrest warrant issued against her in a case related to 1994 Hubli riots.

Later, Babulal Gaur, a confidant of Ms Bharti, was made the chief minister as a stopgap arrangement till she was cleared of the case.

But, she fell from grace of the Central party leadership, which led Mr Chouhan to succeed Mr Gaur in the post in 2005. Mr Chouhan can be an accidental chief minister again.

Lady luck may smile at him if the Kamal Nath government which survives on outside support of two BSP MLAs, one SP legislator and four Independents, fails to complete its full term or is pulled down by MLAs who have extended support, a scenario visualised by some saffron leaders.

Mr Chouhan will certainly be the first choice for CM’s post for BJP in such a situation, political commentator M.K.Chaturvedy remarked. That’s why Congress, it seems, is worried.