Vivek Doval said Jairam Ramesh, Editor-in-Chief of Caravan and author of an article in it had 'deliberately maligned and defamed' him. 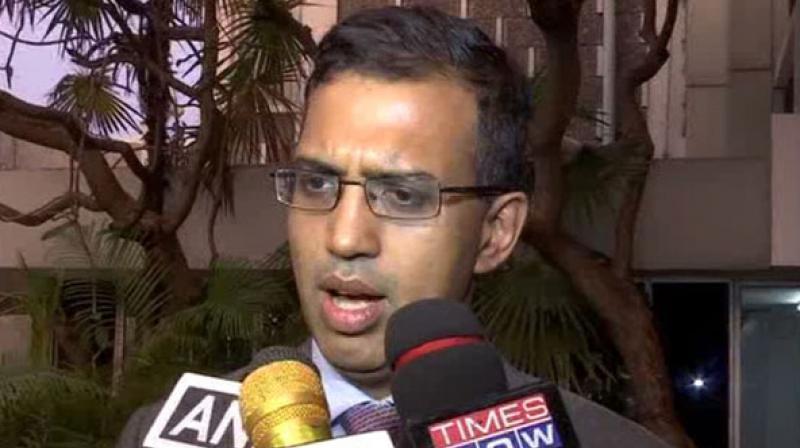 Vivek Doval filed criminal defamation case against Congress leader Jairam Ramesh and 2 journalists, contending that they had caused 'irreparable damage' to his reputation 'through calculated insinuations and innuendos'. (Photo: ANI)

In his petition filed before the Chief Metropolitan Magistrate of Delhi’s Patiala House Court, Vivek Doval, a UK national and an Overseas Citizen of India, said Ramesh and Editor-in-Chief of Caravan magazine and author of an article in it had “deliberately maligned and defamed” him,” seemingly to settle scores” with his father Ajit Doval.

The court will hear the matter on Tuesday.

The complainant said Ramesh and the two journalists, through “deliberate insinuations”, had made “grave and serious allegations” of money laundering against GNY Asia, a hedge fund based out of Cayman Islands, “which is a legitimate and ethical business venture of the complainant, not only without any proof thereof, but being completely aware of the falsity thereof.”

Vivek Doval said he, along with Amit Sharma, is the founder director of GNY Asia.

“Through calculated insinuations and innuendos raised by way of published articles and press conferences, the accused persons have raised unfounded and baseless allegations against the complainant, and have caused irreparable damage to his reputation and goodwill that he had earned for himself over years of hard work,” the complaint said.

The entire controversy started with the publication of the article which “has been couched in a manner that it raises apprehensions on the ventures of the complainant and candidly relates the same to the demonetization in the country,” Vivek Doval said in his plea.

“The article did serve its purpose of creating a hue and cry and maligning the reputation of the complainant and his family,” he added.

Vivek said not only him, but his elder brother and his companies have also been maligned which “clearly reveals that the complainant has been targeted only by virtue of being the younger son of Ajit Doval.”

He added that “The imputations have neither been made for promotion of any public good nor do they touch any public question but have been made in a concerted effort to inflict injury on the complainant and his family in view of the upcoming elections at the Centre.”

The complainant submitted that “the statements/insinuations made by the accused persons are far from truth and have not been made in any good faith.

“To the contrary, the insinuations have been so made by the accused persons, in active connivance with each other, with the concrete knowledge that imputation will harm the reputation of the complainant and the Doval family.”

Vivek Doval contended that Ramesh and the two journalists “have committed the offence of defamation punishable under section 500 of IPC (which provides for simple imprisonment for a term which may extend to two years, or with fine, or with both) read with Section 120-B IPC (criminal conspiracy).”