The university’s Centre for translational Research excels in applying findings from basic science to enhance human health and well-being. 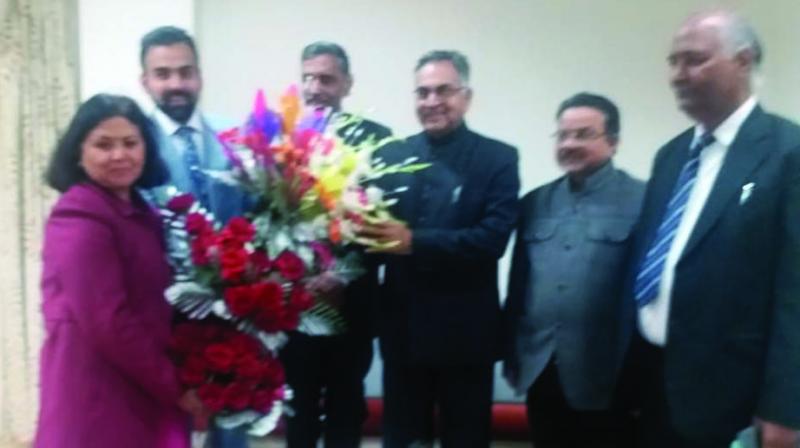 Jivaji University vice-chancellor Sangita Shukla with AIMIL Pharma’s Sanchit Sharma at the time of signing an agreement for research in ayurveda.

Taking a cue from successful industry tie-ups of the Council of Scientific and Industrial Research (CSIR) and Defence Research and Development Organisation (DRDO), Madhya Pradesh government-funded Jiwaji University (NAAC A grade accredited) has signed an agreement with Delhi-based AIMIL Pharmaceuticals to study centuries-old ayurvedic formulations, standardise and authenticate them and use information about their potent ingredients for developing new medicines.

“AIMIL will pump in resources, like equipment and technology inputs, to help the university utilise its pool of qualified researchers to its optimal potential,” said AIMIL executive director Sanchit Sharma.

University vice-chancellor Sangita Shukla thanked the Union ayush ministry for promoting research in ayurveda and said, “It is a win-win situation for us. The arrangement will open new avenues for our faculty and students while giving AIMIL access to latest research feedback.”

The university’s Centre for translational Research excels in applying findings from basic science to enhance human health and well-being.

“Ayurveda is the key to treating some of the incurable diseases. If old formulations are subjected to modern research, we will surely be able to develop world-class medicines with negligible side effects,” said Mr Katoch.

Highlighting the gains from tie-ups between researchers and industry, he cited the example of DRDO developed formulation to treat white skin spots or vitiligo, Lukoskin, and CSIR-developed diabetes formulation called BGR-34. The Union government has tied-up with AIMIL for marketing the two drugs. The CSIR developed  BGR-34, after standardisation and pre-clinical studies conducted jointly by its two labs — Central Institute of Medicinal and Aromatic Plants and National Botanical Research Institute. It is meant to be used by newly-diagnosed diabetes patients for management of the disease. BGR-34, is an add-on or adjuvant to existing diabetes treatment helping to maintain normal blood glucose levels, in addition to improving the immune system, releasing antioxidants and checking free radicals.