Only 4 per cent households were covered under widow pension, 2 per cent retirement pension and 1.5 per cent under disability pension. 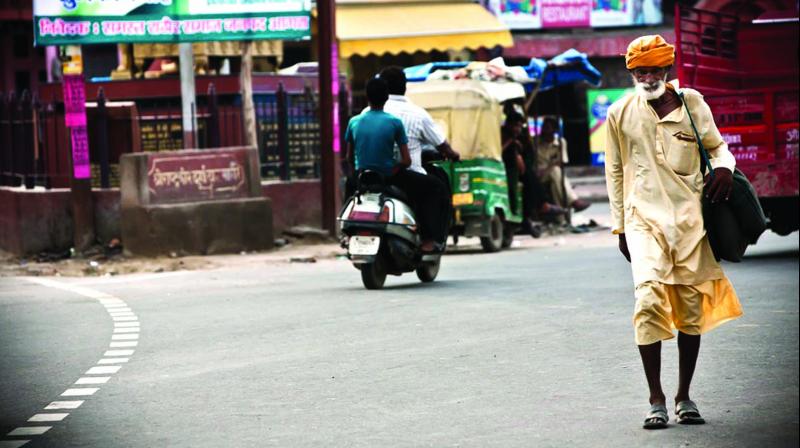 India’s ageing population is expected to grow at more than double the rate of the general population According to Census 2011, India has 10.8 million senior citizens (above 60 years of age).

India is home to one-fifth of the world’s population which includes a third of the world’s poor and one-eighth of the world’s elderly. Most of them spend their whole lives as informal workers and have no retirement security other than the hope that their children will care for them in their old age. This arrangement worked well as long as the joint family structure was the dominant characteristic of the Indian society. However, with new social norms eroding the family-based system of support, old-age care for low-income citizens has become a critical challenge. With underdeveloped annuity markets and poor financial literacy, these people face considerable challenges in planning their retirement security. Many elderly citizens are stuck with lives of never-ending work — a fate that may befall millions in the coming decades. We can see a miserable preview for those who don’t have the pensions that previous generations enjoyed.

India is experiencing a demographic transition leading to lower fertility, increased life expectancy, and a consequent increase in the proportion of the elderly. Families are shrinking and transforming into nuclear units. Individualistic attitudes and rising aspirations with the accompanying changes in lifestyles are widening the generation gap. According to the India Human Development Survey (IHDS) of the National Council of Applied Economic Research (NCAER), 45 per cent of elderly males and 75 per cent of elderly females are currently fully dependent on others.

India’s ageing population is expected to grow at more than double the rate of the general population According to Census 2011, India has 10.8 million senior citizens (above 60 years of age). This number is expected to increase substantially in the coming years with a rise in the life expectancy to 65 years from 42 years in1960. In fact it is predicted that between the years 2000 and 2050, the population of India will grow by 55 per cent. However, the population above 60 years and 80 years will grow by 326 per cent and 700 per cent respectively.

Several studies have established that India has a very young and immature pension industry and a population that is not particularly keen to secure its retirement. A mere 7.4 per cent of the total Indian population is covered under any form of pension plans, which is an alarming figure in itself. India spends 1.45 per cent of its Gross Domestic Product (GDP) on social protection, among the lowest in Asia, far lower than China, Sri Lanka, Thailand, and even Nepal.

With a breakdown of the joint family, support in old age, rising life expectancy, negligible lifetime savings and pension exclusion, the elderly face the grim prospect of living in poverty after they are too old to work. Women are further disadvantaged due to lower incomes, a relatively higher life expectancy than men, frequent employment interruptions at a younger working age and lower access to formal finance.

The main issues that characterise old age security are:

* Traditional systems of inter-generational care are either breaking down or are no longer perceived as reliable.

* Assets, especially land and property, are seen as the best way to guarantee old-age security but seem to be out of reach for many poor people.

* Poor people usually have a low estimate of and little experience with their capacity to use savings as a route to old-age security.

There is an immediate need for a reliable and convenient pension scheme. A pension is a financial tool that is generally defined as a long-term voluntary savings plan by an individual during his working life to yield returns living post-retirement to enable her/him to maintain a decent standard of living.

For the poor and vulnerable, two types of pension could be provided. The first is a public or social pension, where the state raises the revenue and redistributes to the citizens when they reach a stipulated age, in order to guarantee them a dignified life. The second is a personal retirement savings plan. People save a small part of their income individually during their working life that is invested collectively to generate periodical returns. When people retire, their accumulated capital is paid out in monthly amounts. The first one has issues of viability. A possible solution could be a universal social pension with a fairly high retirement age so that expenditure is contained.

The daily wage workers live on a day-to-day basis and as a result, their immediate financial needs take priority over their future needs. They are not able to plan for their long-term future and as a result, they have to work through their entire life. At the national level, they are not covered under any pension suitable to them. Neither their own financial attitude nor any formal financial scheme or state safety nets enable them to secure their old age years.

Though informal sector workers may not “retire” in the formal sense like employees in the organised sector, they do need to prepare for the eventual reduction in earning capacity that will occur during old age, especially on account of ill health. Micro-pension, therefore, aims to provide an income stream to coincide with this decline in earning capacity.

The well-known micro-finance expert Stuart Rutherford succinctly sums up the dilemma of the poor when it comes to micro-pension: “Poor people understand the purpose and value of saving. They sense that there may be a savings route to old-age security, and grab opportunities when they come their way. But they are beset by many difficulties, both in their own circumstances and in the financial services available to them, so that in practice success remains the exception rather than the rule.”

The pension system of the country has to evolve quickly, or else the economy will be left in a dire state. There are numerous government-supported micro-pension schemes, but also several mounting challenges. The reluctance of people towards investing any part of their income over a large period of time, an absence of regular income for clients, poor infrastructure/connectivity and remotely spread clientele. The Indian government doesn’t seem to have much appetite for social protection programs and its efforts in evolving a relevant pension model have been patchy.

Micro-pension has low-ticket, high-volume transactions which make it unviable. With a small corpus, high transaction costs and wafer-thin margins (or even losses), the viability of micro-pension is a big issue. Another challenge is getting the agents to sell the scheme, as commissions are small. Premature withdrawal and closure are also a serious problem.

For micro-pensions to succeed, a delicate balance between economic viability, generation of adequate returns and customised features for the participants is required. As the income flow of low-income communities is uncertain or volatile, they should be offered a degree of financial flexibility providing for low or no minimum contribution requirements in order to encourage membership.

However, contributions that are set too low or which are paid very unevenly may not provide sufficient income security. Experience with savings-based pension plans indicates that low-income groups prefer lower-value and frequent deposits rather than infrequent larger-value deposits. As there are competing demands on their resources, it is difficult for them to accumulate large amounts. In order to facilitate the making of frequent deposits, convenient door-to-door deposit collection has to be organised. Mobile phones have transformed the landscape in a revolutionary way and this may not be such a tall order.

An ideal micro-pension plan needs to address governance, design, administrative and efficiency issues to succeed and requires multi-model implementation in addition to a separate set of regulations on account of the complex nature of the Indian employment profile.

The writer is Member, Niti Aayog’s National Committee on Financial Literacy and Inclusion for Women