Countries like US, Japan, China ageing, India getting younger: Swaraj

‘The Indian diaspora has dramatically changed the world's perception of Indians and our country,’ said Sushma Swaraj. 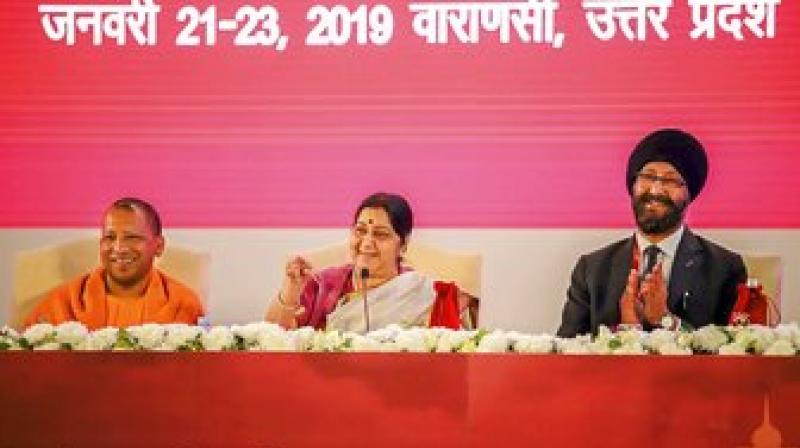 ‘By 2022, these ageing countries will become super-aged with over one-third of their population over 65 years of age, while India will have the world's largest working population,’ says External Affairs Minister Sushma Swaraj. (Photo: PTI)

Varanasi: Underlining that countries such as the US, Japan and China are ageing rapidly, External Affairs Minister Sushma Swaraj on Monday said India is getting younger and this demographic perspective offers it an "unprecedented edge" that will help in building a "New Young India" by 2022.

Swaraj, in her inaugural address at the Youth Pravasi Bharatiya Divas, said the Indian diaspora has dramatically changed the world's perception of Indians and our country. "India has the largest diaspora in the world, at almost 31 million, which is spread throughout the globe. However, what marks all of you is the shared common identity – of Indianness – and a shared common origin – India, land of your forefathers," Swaraj said at the Youth PBD.

The 15th PBD will be officially inaugurated by Prime Minister Narendra Modi in the presence of chief guest of the event Mauritian Prime Minister Pravind Jugnauth in Varanasi on Tuesday.

Swaraj, in her remarks, said the success of each and every Indian emigrant is a testimonial to their unbeatable spirit, dedication and patience in the face of extreme hardships. "While the Indian diaspora started migrating centuries ago, it is the migration of the educated, highly-skilled and dynamic young Indians that has brought laurels to India," she said, noting that many of the multi-national corporations are headed by young Indian-origin CEOs such as Sundar Pichai of Google and Satya Nadella of Microsoft.

Swaraj highlighted that by 2020, the average age in India will be 29, making it the world's youngest country with 64 per cent of the population in the working age group. "While countries like the US, Western Europe, Japan and even China are ageing rapidly, India is getting younger and younger. By 2022, these ageing countries will become super-aged with over one-third of their population over 65 years of age, while India will have the world's largest working population. This demographic prospective offers India an unprecedented edge, which could further contribute to building a New Young India by 2022. It is projected that India will be the source of skilled manpower to the world by 2022," she said.

The government's Skill India initiative is aimed at making the county the skill capital of the world by 2022. "Our aim is to not just export 'man-power' to the world, but to export 'skills'.

Exporting 'skilled' manpower will not only garner a better image for India on the global space, but also will lead to better salaries and better remittances, thus raising India's GDP further," the minister said.

Asserting that India is now a land of innovation and start-ups, Swaraj said contribution of Indian diaspora in technical field was exemplary with nearly 16 per cent of start-ups in the Silicon Valley having an Indian co-founder.

In the last four and a half years, the government has dismantled lots of rules and regulations and further opened up India's investment regime, Swaraj said.

Uttar Pradesh Chief Minister Yogi Adityanath said he has made a lot of efforts to change in the investment scenario in the state. He also invited all NRIs to invest in the land of their forefathers.

"Our diaspora has always championed Indian culture in faraway lands and contributed tremendously to India's success story," Rathore said on the occasion.

Later, the First Plenary Session on 'Engagement with younger members of Indian Diaspora', co-chaired by Rathore and Singh, was held.