J&K: Death toll rises to 11 in 4 days of ceasefire violation by Pak

Sepoy C K Roy, was injured in Pakistani firing on Saturday and succumbed to injuries at the military hospital on Saturday night. 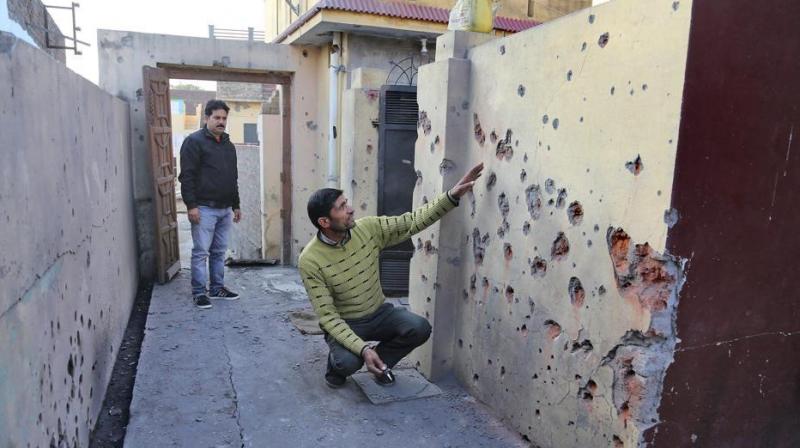 Villager shows a damaged section of his house after shelling from the Pakistani side on the India-Pakistan international border at Arnia Sector about 45km from Jammu on Saturday. (PTI Photo)

Jammu: An Army jawan injured in ceasefire violation by Pakistan succumbed to injuries Saturday night, taking the death toll in the border firing in Jammu and Kashmir to 11 since Thursday, police said.

Sepoy C K Roy, posted in a forward post in Mankote sector of Poonch district, was injured in Pakistani firing on Saturday and succumbed to injuries at the military hospital on Saturday night, a police official said.

His death raised the number of persons killed in the Pakistani firing along the Line of Control (LoC) and International Border (IB) in five districts of Jammu, Kathua, Samba, Poonch and Rajouri since Thursday to 11.

Soldier Chandan Kumar Rai have lost his life in ceasefire violation by Pakistan in Mendhar sector of Poonch #JammuAndKashmir pic.twitter.com/LfXlpi22KC

While a BSF jawan and a teenaged girl were killed on Thursday, four persons -- two civilians and one each BSF jawan and Army jawan -- were killed and over 40 others, including two BSF personnel, injured in the Pakistani firing on Friday.

Three civilians and an Army jawan were killed and 16 others injured in the ceasefire violations on Saturday.