Recently, actor Richard Gere and other dignitaries had visited temple to offer prayers. 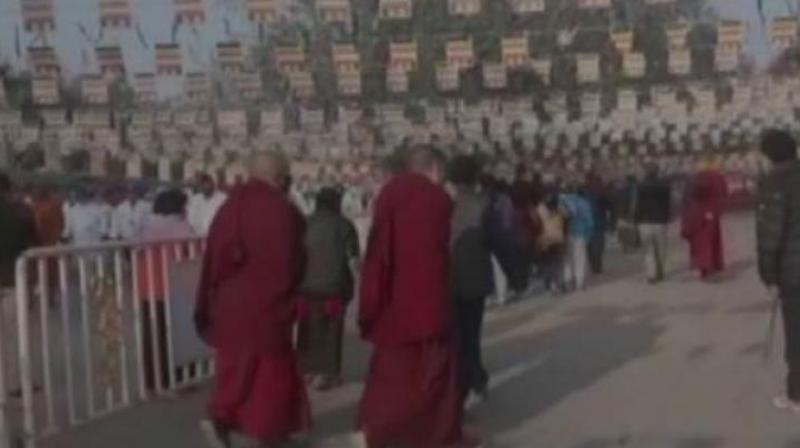 According to the Gaya police, the bombs were seized from near Kalachakra ground after a low-intensity explosion took place in the area. (Photo: ANI)

Patna: A major incident was averted after security forces destroyed two crude bombs which were found outside the Mahabodhi temple on Friday.

According to the Gaya police, the bombs were seized from near Kalachakra ground after a low-intensity explosion took place in the area.

Sources said that the explosion occurred shortly after Tibetan spiritual leader the Dalai Lama left the venue and retired for the day. The Dalai Lama had arrived in Bodh Gaya on January 1 and is likely to remain in town for the entire month.

Recently, Hollywood actor Richard Gere and other dignitaries had visited the Buddhist temple to offer prayers.

“It was a low-intensity explosion which alerted the security forces and prompted them to search the entire area. They recovered two bombs packed in cans, which were later destroyed. Security in the area has been stepped up and a massive probe is being carried out,” Gaya DM Abhishek Kumar Singh told reporters.

The initial probe carried out by the Gaya police suggests that the bombs, packed in two cans weighing 10 kg each, were found near gate number 4 of the Mahabodhi temple late Friday evening.

According to sources from Gaya, authorities are also trying to find out if any terrorist outfit was linked with the conspiracy to create panic in pilgrims.

The recovery of bombs from the temple area also raises questions on the deployment of security forces. The Mahabodhi temple had been the target of terror groups earlier.

In 2013, a serial bomb blast in Bodh Gaya had injured at least six persons, including two Buddhist monks. The NIA, which investigated the bombing, had found the involvement of banned terror outfit Simi.

Sources claim that during interrogation, one of the terrorists had revealed that serial blast was carried out to avenge the killing of Rohingya Muslims in Myanmar.