Violent protests break out in Patna over CAA

Angry protesters demanded the scrapping of the CAA and vandalised private and commercial vehicles in and around Patna during the bandh. 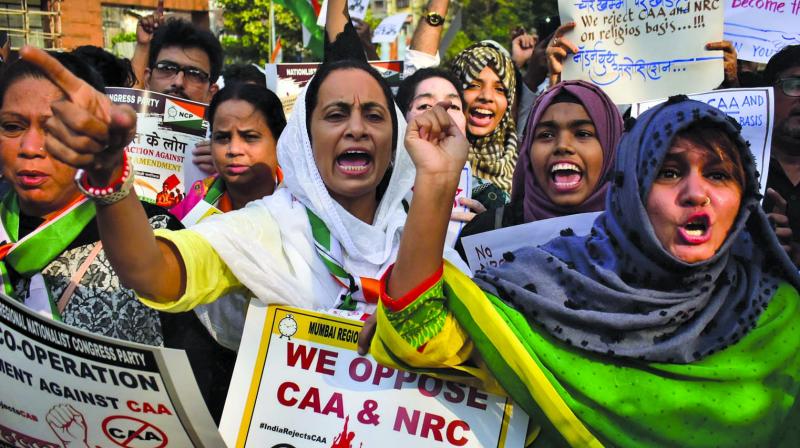 A cross-section of the society joined hands to protest against the contentious Citizenship Amendment Act, 2019 at the historic August Kranti Maidan in South Mumbai on Thursday. (Photo: DEBASISH DEY)

Angry protesters dema-nded scrapping of the CAA and vandalised private and commercial vehicles in and around Patna during the bandh.

In some districts including Patna, Ara and Darbhanga protesters disrupted rail routes.

Amid a nationwide prot-est over the CAA, left parties with support from around six Opposition pa-rties in Bihar had called for a state-wide bandh on Thursday. However, the RJD which is the main opposition party in Bihar didn’t participate in the bandh and said that “the party has decided to org-anise a separate state-wide agitation against the issue on December 21”.

When asked about the RJD’s absence, CPI (ML) leader Kumar Parvez told this newspaper that the “people of Bihar came out in large numbers to support the bandh called by left parties.

The Opposition parties also supported our protest against the CAA and NRC and as far as RJD is concerned, they have organised a similar bandh on December 21 and we have decided to support it”.

Supporters of Jan Adhikar Party (JAP) floated by former member of Parliament Pappu Yadav used burned tyres to stop traffic on the streets and also vandalised an ambulance while it was heading towards a residential area in Patna during the bandh.

Mr Yadav who had earlier claimed that he had been placed under house arrest for extending support to the bandh said, “We have come out on the streets to oppose the amended Citizenship Act which is against the Constitution. It seems that the entire nation today has been held captive and needs to be released”.

The BJP reacted strongly against the agitation and termed it as “a complete failure”.

While leading a march in favour of the Act, Dalit leader and BJP MLC Sanjay Paswan said, “The left and other Opposition parties are trying to mislead people about the Citizenship Amendment Act. I urge people to understand the Act and not to fell into the trap of the parties who are feeding them with wrong information for political gains.

The Act is favour of refugees and against illegal infiltrators. Those who are opposing the Citizenship Act and NRC are supporting infiltrators".