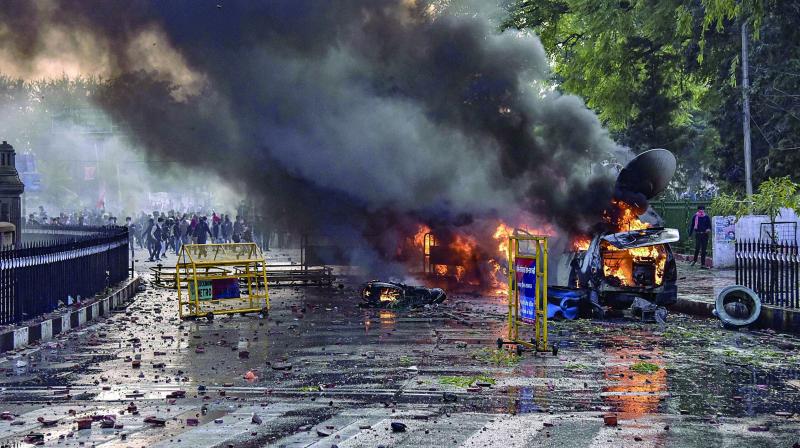 Protesters go berserk in Lucknow. Smoke billows out of a burning media OB van during a protest against NRC and amended Citizenship Act, at Parivartan Chowk in Lucknow on Thursday. (Photo: PTI)

Lucknow: Anti-citizenship law protesters went berserk in parts of Lucknow on Thursday, hurling stones and damaging police outposts and a number of vehicles mainly in the Old City areas of the Uttar Pradesh capital, forcing police to use tear-gas shells to control the situation.

A man died of a firearm injury he suffered while passing by a demonstration, but police denied the death was linked to police action. It was not immediately clear from where the firing took place.

The protest continued for hours and the protesters torched a state-run bus at Parivartan Chowk, close to the district magistrate's office, and set on fire a police post in Satkhanda area.

Another police post was damaged in old Lucknow's Madeyganj, where police fired tear-gas shells after protesters smashed vehicles parked outside a police post. About 20 people were taken into custody.

When protesters in other parts of Lucknow hurled stones at police, they were lathicharged. In several areas, including Hasanganj, policemen had a tough time tackling the protesters, who adopted a hit-and-run tactic, officials said. A few policemen were injured in the violence.

King George's Medical University Trauma Centre in-charge Sandeep Tiwari said a man had died of firearm injury there. “Two other patients are undergoing treatment and one of them has a fire arm injury,” he added.

Uttar Pradesh police chief O.P.Singh said the death of Mohammad Wakeel, 25, was not linked to the agitation or police action. He also said the situation was now under control and the priority was to maintain peace during Friday prayers.

Wakeel's brother, Taufiq, told reporters that “his brother was going home in Hussainabad as there was trouble and he was shot by a ‘daroga’ (police officer) from a police outpost.”

“Initially it was said he had pellet injuries. He was not involved in any agitation. We both are autorickshaw drivers and never indulged in any such act (agitation),” Taufiq added.

At Parivartan Chowk, which appeared to be the epicentre of the agitation, policemen faced brickbats and the van of a television crew was damaged.

Smoke was billowing out of the vehicle.

Gates of the nearby KD Singh metro station were shut to keep protesters out of the area.

The violence against the amended law led to panic among residents and forced traders in many markets, including the busy Hazratganj area, to shut their shops.

TV footage from different parts in the capital showed large areas strewn with brickbats, bearing the signs of the clashes between the police and the agitators. Many stone-pelters had their faces covered with masks or handkerchiefs.

“The situation is under control and there is no need to panic. Those who created trouble are being identified,” IG (Law and Order) Praveen Kumar told reporters.