This comes a week after RLSP chief Upendra Kushwaha quit the BJP-lead alliance complaining of 'arrogance'. 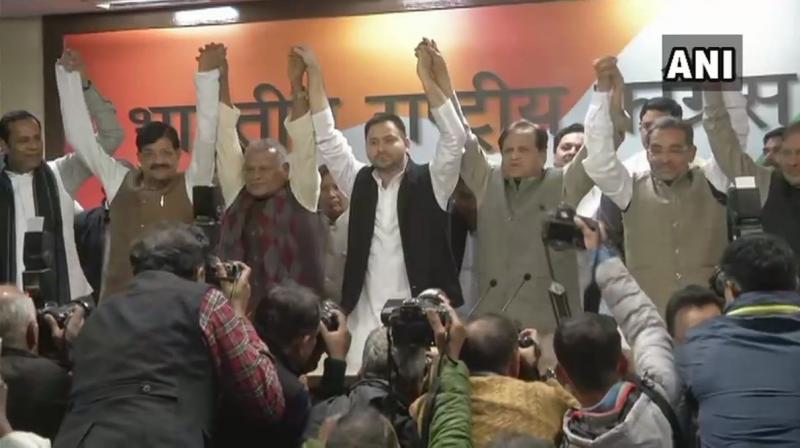 Congress leader Ahmed Patel made the announcement while addressing a press conference in the national capital. (Photo: Twitter | ANI)

Congress leader Ahmed Patel made the announcement while addressing a press conference at the AICC office in New Delhi. “There is a gathbandhan in Bihar. It's a matter of happiness that Upendra Kushwaha is joining the mahagathbandhan,” Patel said.

After joining the grand alliance, the RLSP supremo said, “We had said that we have many options and UPA was one of them. The wholeheartedness shown by Rahul Gandhi and Lalu Yadav is one of the reasons I joined but the biggest reason I'm here is the people of Bihar.”

Leaders of 'mahagathbandhan' in Bihar, including Hindustani Awam Morcha (HAM) leader Jitan Ram Manjhi, RJD leader Tejashwi Yadav and Congress leader Shaktisinh Gohil were among those who were present there.

Kushwaha quit the NDA in Bihar on December 10 over the seat-sharing deal for the 2019 Lok Sabha elections. He had been unhappy as the arrangement left smaller parties with lesser seats as the BJP went out of the way to accommodate Bihar Chief Minister Nitish Kumar by agreeing that the party and the JD(U) would fight equal number of seats.

On Wednesday, Kushwaha slammed his former National Democratic Alliance allies and said, "People of the NDA have become arrogant, particularly Nitish Kumar in the context of Bihar. It was this conceit that made us split from them."

He further praised Congress chief Rahul Gandhi and said, “he (Gandhi) had evolved into a mature leader and is a likely option for replacing Narendra Modi as the Prime Minister next year".