India   All India  20 Dec 2017  Sachin speaks: Tendulkar may talk on these points in his RS debut speech
India, All India

Sachin speaks: Tendulkar may talk on these points in his RS debut speech

Cricket superstar and Rajya Sabha MP Sachin Tendulkar is scheduled to speak at 2 pm on Thursday. 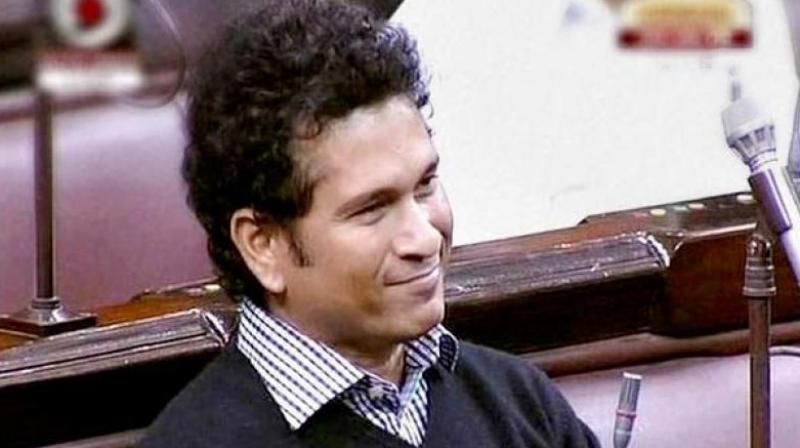 This is Sachin Tendulkar’s first attempt at initiating a debate in the upper house, where he has been a member for five years and is a year short of completing his term. (Photo: File)

New Delhi: Cricket superstar and Rajya Sabha MP Sachin Tendulkar will finally speak in the House on Thursday during the ongoing Winter Session.

The cricket legend Sachin who has submitted his request for a Short Duration Discussion in the Rajya Sabha secretariat is scheduled to speak at 2 pm on Thursday.

This is Sachin’s first attempt at initiating a debate in the upper house, where he has been a member for five years and is a year short of completing his term.

The master batsman is likely to speak on the issues of athletes and sportspersons.

Sachin is also expected to talk on the lack of proper training facilities for athletes to make them compete at the Olympics and other international level competitions.

The sportsperson and politician is also going to raise issues about lack of financial assistance to retired sportspersons in India.

Sachin in his speech is also likely to demand induction of sports in the educational curriculum at school level so that India can generate better athletes and sportspersons with a discussion on 'Right to Play'.

The master batsman, who had been nominated to the Upper House in April 2012, had been frequently criticised for his long absences. The criticism has become sharper since Sachin retired from international cricket in 2013. He became the first active sportsperson ever to be made an MP.

His last appearance in Rajya Sabha was in August, but he had not spoken, choosing instead,   to listen to the discussions during the Zero Hour and the Question Hour.

Sachin has only attended 23 of the 348 days since his nomination till now and has not participated in any debate.

Along with Sachin, celebrity MP Rekha has also often faced criticism over low parliamentary attendance since her appointment as a Rajya Sabha MP.