Rajya Sabha saw two adjournments during the pre-lunch period, till the Chair finally called it a day a little after 2 pm. 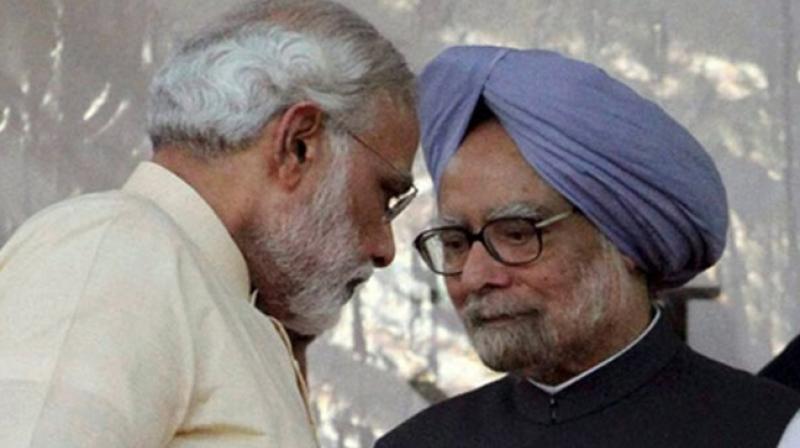 Noisy protests by the members of the Congress and other opposition parties seeking an apology from the Prime Minister continued unabated throughout the day since the proceedings began. (Photo: PTI)

New Delhi: Congress protests over Prime Minister Narendra Modi's "conspiracy with Pakistan" remark against his predecessor Manmohan Singh on Wednesday led to a virtual washout of the Rajya Sabha proceedings, even as Chairman Venkaiah Naidu said there was no question of an apology.

Noisy protests by the members of the Congress and other opposition parties seeking an apology from the Prime Minister continued unabated throughout the day since the proceedings began.

The Upper House saw two adjournments during the pre-lunch period, till the Chair finally called it a day a little after 2 pm.

The Prime Minster's remarks also had its toll on proceeding in the Lok Sabha, where Congress members staged a walkout and boycotted the proceedings in the afternoon.

In the Upper House, Congress members raised slogans and created uproar soon after the House met for the day.

As the protesting members entered the Well raising slogans, Naidu adjourned the House first during Zero Hour till noon and then during Question Hour till 2 pm.

Earlier, Chairman Venkaiah Naidu said there was no question of giving an apology on the issue as nothing has been stated inside the House.

"Nobody is going to give apology. Nothing happened in the House. No statement is made in the House. There is no practice of suspension of Question Hour. Don't make a mockery of the House. Already wrong message is going," a visibly agitated Naidu told the protesting members when the House reassembled at noon after the first adjournment.

However, Leader of Opposition Ghulam Nabi Azad said a little before the House was adjourned for the day, "We are not demanding an apology...But PM should come to the House and say that he has made such statements to win the elections..."

Raising the issue, Azad said the Prime Minister should clarify that he had made "such serious allegations" against a former Prime Minister, a former Vice President and an ex-Army Chief for winning elections and it was an election stunt.

"Not even an ordinary MP or a worker can think of joining hands with Pakistan...For the last few days, we have been demanding that the PM should clarify on it...Tomorrow it is his Question Hour... he should clarify," Azad said.

Amidst the din, Deputy Chairman PJ Kurien asked Petroleum Minister Dharmendra Pradhan to move the Indian Institute of Petroleum and Energy Bill, 2017 for consideration and passage.

However, as the members trooped into the well and started raising slogans like "Pradhan Mantri Sharam Karo" (PM have shame) and "Jhoothe Aarop Wapas Lo" (withdraw false allegations), Kurien asked the House to maintain order and let him take up the Bill.

As the uproar continued, Kurien said "the Leader of the Opposition has raised the point. Even without knowing whether government has a reaction to it, how do you come to conclusion? The Chair can do nothing about it. I will be forced to adjourn the House."

However, as the ruckus continued he adjourned the House for the day.

Earlier in the day, the Chairman had disallowed the protesting Congress members from raising the issue and warned them not to create obstruction and allow other members to raise important issues.

"This is Parliament. This is Rajya Sabha. Wrong message is going." Stating that he did not appreciate their behaviour, Naidu said "please don't exceed the limit. Please go to your seat".

Thereafter, he adjourned the House till noon.

Later when the House met again for Question Hour, Naidu's pleas to allow the House to function did not find favour with an unrelenting opposition.

"Don't attempt to snatch the rights of others. Let the members have the opportunity to ask their questions. Questions have been listed and much money has been spent...This is not the way," he said.

However, as the unrelenting members continued their uproar, the Chair adjourned the House till 2 pm.