Theertha was speaking at the 'Santa Samagam' a congregation of saints in Udupi. 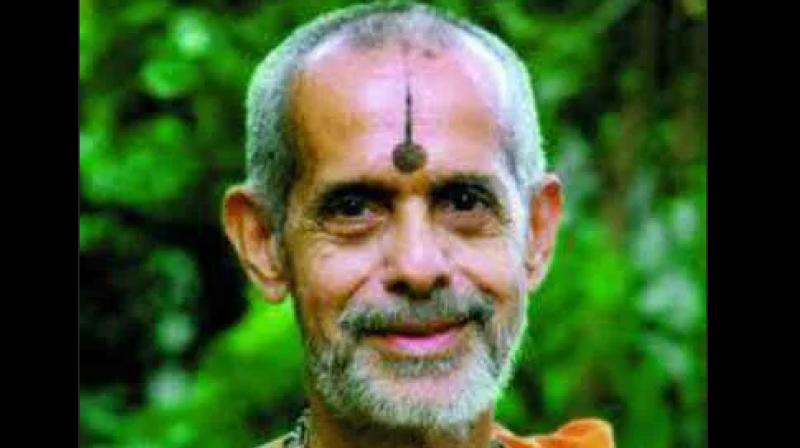 Pejavar Seer said if we had embraced cow, the symbol of love and innocence, then there would not have been any terrorists born in this country. (Photo: Facebook)

Udupi: Sri Vishwesha Theertha Swamiji of Sri Pejavar Mutt, Udupi, on Tuesday, held our national animal the tiger responsible for "the increasing terrorism" in the country.

He justified by saying that the core characteristic of a tiger and a terrorist is the same and we have committed a mistake by accepting tiger as our national animal.

He suggested India adopt the cow as the national animal. He said if we had embraced cow, the symbol of love and innocence, then there would not have been any terrorists born in this country.

Theertha was speaking at the 'Santa Samagam' a congregation of saints in Udupi.

Baba Ramdev was also present at the saints' congregation. While addressing the gathering, he said that non-vegetarian food has caused global warming.
He also emphasised on the need for stringent laws banning cow slaughtering. He cited the existence of cow slaughter during the times of rulers like Babar to Aurangzeb.

He suggested that people should at least abstain from eating beef, if not other meat.

Theertha said along with the preservation of cows, the purification of river Ganga should be the utmost priority for Indians and also batted for the uniform civil code.

He asserted it was of utmost importance to the country as every citizen deserves to be treated equally. He suggested that the Hindu saints can hold the outreach program with the leaders of Muslims and Christians so that they all can arrive at a consensus soon.

The group of saints also discussed matters of national security. Sri Vidyadheesha Theertha of Paryaya Sri Palimar Mutt, Udupi, who was presiding the the programme, said that after the unification of Jammu and Kashmir with the India through the abrogation of Article 370, governement's next focus should be on integrating Pak Occupied Kashmir (POK) with India.