Rajan Mahbubani (48) was wearing the pilot's uniform when he was arrested from the departure gate of the airport on Monday. 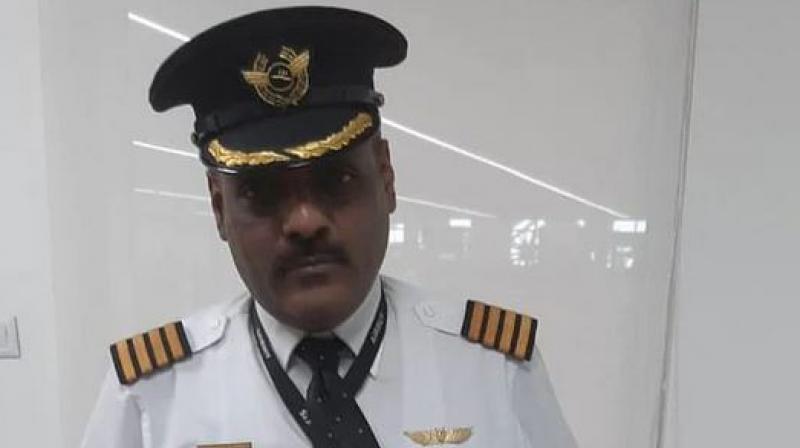 He was handed over to the Delhi Police for further probe. (Photo: ANI | Twitter)

New Delhi: A Delhi-based man has been arrested by CISF personnel at the Indira Gandhi International Airport for allegedly "impersonating" as a pilot of Lufthansa airlines to escape long queues and security checking, officials said on Tuesday.

Rajan Mahbubani (48) was wearing the pilot's uniform when he was arrested from the departure gate of the airport on Monday. He was just about to board an Air Asia flight to Kolkata, they said.

He was handed over to the Delhi Police for further probe.

The CISF action came on the basis of information provided by the Chief Security Officer (CSO) of the German airlines which said that there is a "suspected passenger in the getup of a captain of Lufthansa airlines."

"The man, who lives in Vasant Kunj area of the national capital, was in possession of a fake ID card of Lufthansa Airlines captain, and he used it to get privilege at airports," a senior Central Industrial Security Force (CISF) officer said.

"The passenger disclosed that he used to shoot YouTube videos on aviation and had obtained the Lufthansa fake ID card in Bangkok," the officer said.

During police interrogation, it was revealed that Mahbubani was fond of wearing uniforms of different professions and getting himself snapped in different poses.

In his phone, there are pictures of him posing as an Army colonel. He had shot videos of himself wearing different uniforms on TiKTok -- the social media app for recording and sharing short clips, police said.

"During interrogation, Mahbubani said that he is a frequent traveller and used to impersonate as a pilot of international airlines to gain easy access during security clearance and have preferential treatment from security agencies and airlines," Deputy Commissioner of Police (IGI Airport) Sanjay Bhatia said.

He used to get into the passage which was normally used by airline crew members for getting into the aircraft. He was also carrying a forged identity card of the said airlines. He also used to pose as a pilot to seek preferential treatment from the airlines concerned, the DCP said.

Sometimes he managed to get his seat upgraded and had travelled on different occasions using the same modus operandi, the police officer said, adding a case has been registered and the man has been put under arrest.