The chief minister, who announced a Rs 1,000-crore package on Monday for immediate relief and rehabilitation work. 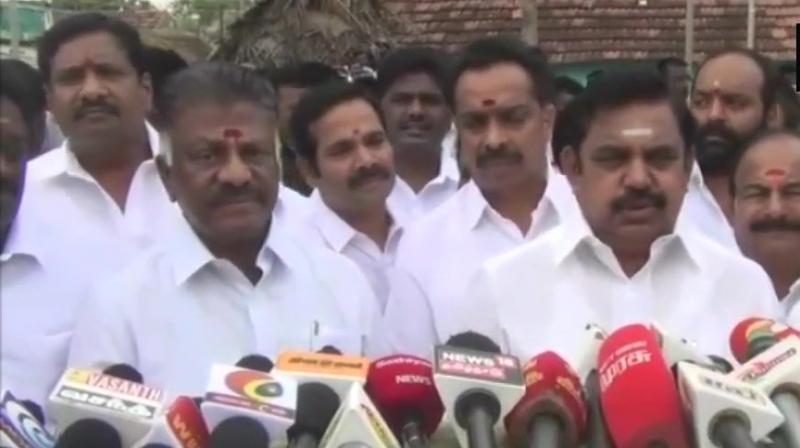 'We have sought appointment with him (Modi). We expect that it could be given day after tomorrow (Thursday). The state government will certainly take steps to get central funds and submit details of the damage with proof,' Palaniswami said. (Photo: ANI | Twitter)

"We have sought appointment with him (Modi). We expect that it could be given day after tomorrow (Thursday). The state government will certainly take steps to get central funds and submit details of the damage with proof," Palaniswami told reporters here during his visit to Pudukottai and Thanjavur districts in the morning.

Tamil Nadu CM Edappadi K.Palaniswami and Deputy CM O. Panneerselvam today distributed relief material to people affected by #CycloneGaja in Pudukkottai. CM says,"We have sought time from the PM Modi, we will explain everything and seek financial assistance from the Union Govt." pic.twitter.com/lOhQ4DqRUf

The cyclone crossed the coast near Vedaranyam in Nagapattinam district, about 300 km from Chennai, with a speed of up to 120 kmph last Friday, claiming 46 lives and leaving a trail of destruction in over 10 districts in southern Tamil Nadu.

Meanwhile, relief work was hampered after various parts of the Cauvery delta region, including the cyclone-hit Nagapattinam and Thiruvarur districts, were lashed by heavy rains since Tuesday morning The weather office has forecast heavy rains in the region under the influence of a well-marked low pressure in the Bay of Bengal.

Amid criticism of his government's handling of the situation, the chief minister, who announced a Rs 1,000-crore package on Monday for immediate relief and rehabilitation work, urged the Opposition to bury political differences and contribute towards the relief activities.

Citing the recent devastating floods in Kerala, Palaniswami said the Opposition there raised no issues then, though it took about a month for the relief activities to be completed. Everyone should go by their conscience and do their bit in helping the affected people, Palaniswami said. On the people's anger over alleged tardy relief works in some places, he said it was due to the government's precautionary measures that loss of lives had been minimised.

None can predict the magnitude of a natural phenomenon and 'Gaja' has left a huge trail of destruction, the chief minister said, adding that the government was taking steps on a war-footing to address the people's issues. Earlier, accompanied by ministers and officials, Palaniswami inspected some coconut groves devastated by the cyclone in Thanjavur district and also distributed relief materials, including rice and other essential articles, to the affected people.

At Pattukottai, he distributed Rs 30 lakh as compensation to a woman, who lost all her three sons in a wall collapse in the wake of the cyclone. The state government had announced a Rs 10-lakh solatium to the kin of those killed in the cyclone.

A report from Nagapattinam said several areas in the district including Vedaranyam and Sirkazhi were experiencing intermittent heavy rains, affecting the relief operations. Protests by the public were reported in some places demanding supply of drinking water and restoration of electricity supply.

On Monday, Palaniswami took stock of the situation at a high-level meeting in Chennai and announced an immediate cash assistance totalling Rs 8,800 to each family sheltered in relief camps, besides 10-kg rice and four litres of kerosene. Palaniswami had said the toll in the cyclone has risen to 46, while as many as 2,51,674 people were staying in relief camps.