The man, identified as Anil Kumar Sharma, has been taken into custody. 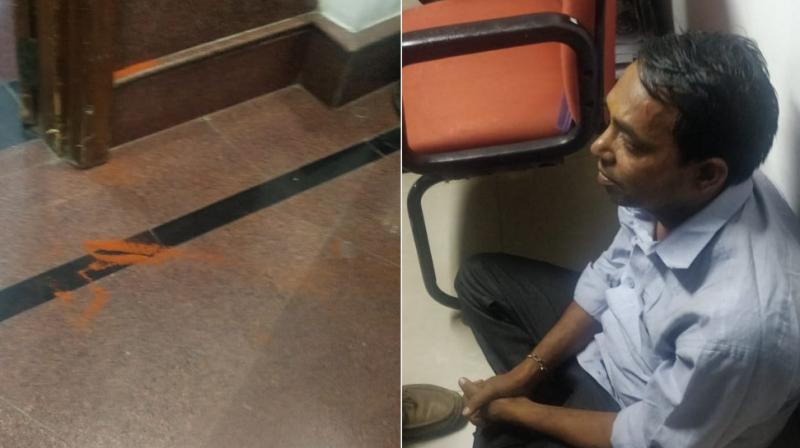 The attack took place outside Arvind Kejriwal’s chamber on the third floor around 2:10 pm when he was leaving for lunch. (Photo: Twitter | ANI)

New Delhi: In a major security breach, a man threw chilli powder at Delhi Chief Minister Arvind Kejriwal outside his office in the Delhi secretariat on Tuesday.

The man, identified as Anil Kumar Sharma, has been taken into custody.

The attack took place outside Arvind Kejriwal’s chamber on the third floor around 2:10 pm when he was leaving for lunch.

The attacker hid chilli powder in a cigarette packet while he was waiting in the visitor's area.

#WATCH: CCTV from Delhi Secretariat. Delhi Police say 'Anil Kumar came to meet Delhi CM to share his grievances. He handed him a note & touched his feet, & chilli powder fell from his hand. Probe underway whether it was an attack or powder fell unintentionally' pic.twitter.com/UYMhCAb3Hm

According to reports, Kejriwal's spectacles broke in the scuffle.

The Aam Aadmi Party (AAP) slammed the Delhi police for ‘security lapse’ as the incident happened in the high-security area.

The Tuesday’s attack is not the first when the AAP convenor was targeted despite heavy security around him. In October 2016, a leader of the Akhil Bharatiya Vidyarthi Parishad (ABVP), a student body linked to the BJP, threw ink at Arvind Kejriwal in Rajasthan's Bikaner.

In January 2016, an AAP rebel had thrown ink at the Chief Minister at a Delhi stadium.