BJP to intensify protests against Vijayan-led govt on Sabarimala issue

The BJP alleged that it was 'police raj' in Sabarimala and asserted that it would intensify its campaign. 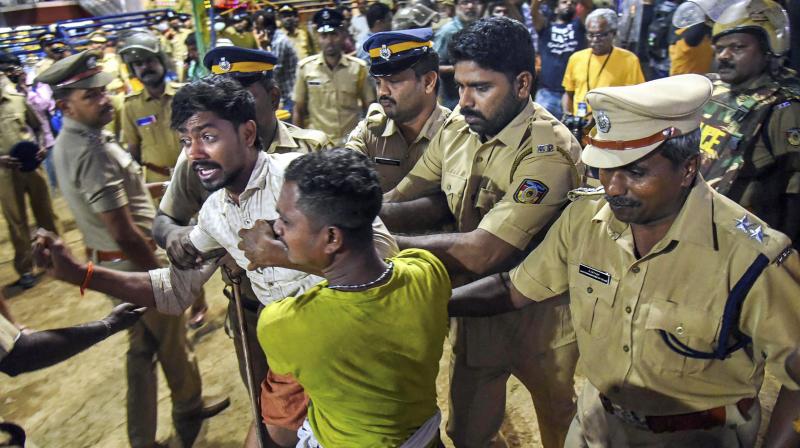 Police personnel detain the devotees who were staging 'Namajapa' protest against the police restrictions at Sannidhanam, in Sabarimala on Sunday. (Photo: PTI)

Kochi: Upping the ante, the BJP Tuesday alleged that it was a "police raj" in Sabarimala and asserted that it would intensify its campaign against the CPI(M)-led LDF government's move to "destroy" the Lord Ayyappa temple.

BJP state president PS Sreedharan Pillai alleged that the ruling CPI(M), using police, was trying to "crush" the party and Sangh Parivar workers who, he said, were staging a "Gandhian model" of protest against the government's "hasty move" to implement the Supreme Court verdict permitting the entry of women of all age groups into the hill shrine.

He alleged that the devotees were being unnecessarily targeted by the police at Sabarimala. Restrictions have been imposed at the shrine following protests by devotees and activists of the BJP and the RSS over the state government's decision to implement the September 28 Supreme Court order allowing the entry of women of menstrual age into the shrine.

Pillai said the party would organise a signature campaign across the state from November 25-30, during which one crore signatures would be collected, seeking to protect the Sabarimala temple from the "assault of atheists."

The party would also organise "Sabarimala Sadas" (conferences) in all 14 districts of the state from December 5 to 10, he said. The BJP leader alleged that the plea filed by the Travancore Devaswom Board in the Supreme Court on Monday, seeking more time to implement its order was not a sincere one.

In its plea, the temple board, which is a statutory body under the Kerala government and runs the shrine, has referred to law and order problems and cited the need to arrange for additional infrastructure, such as washrooms for women pilgrims, among the reasons for seeking more time.