BJP spokesperson Narasimhra Rao took dig at Naidu after he announced that a planned conclave of oppn parties for Nov 22 has been postponed. 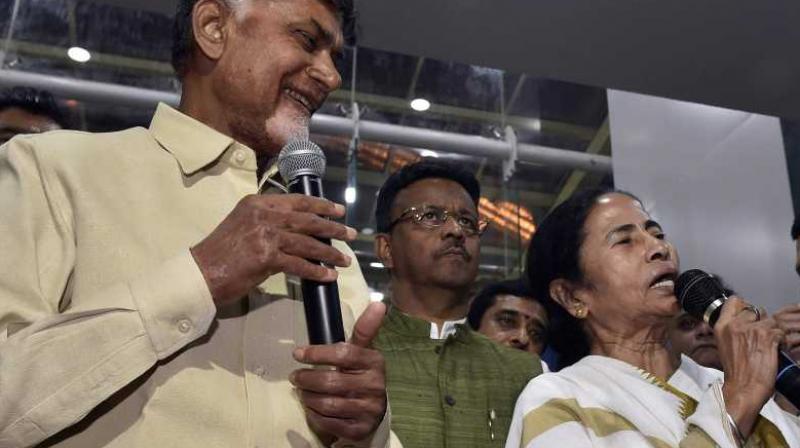 New Delhi: The BJP said Monday that TDP chief Chandrababu Naidu is making futile attempts to build an alliance of opposition parties as many of them are resisting his efforts to grab a central role for himself and to project Congress president Rahul Gandhi as the leader of such a grouping.

BJP spokesperson G V L Narasimhra Rao also took a dig at Naidu after he announced in Kolkata, following a meeting with Trinamool Congress leader Mamata Banerjee, that a planned conclave of opposition parties for November 22 has been postponed.

The meeting will eventually be shelved given the competing interests of the proposed partners and Congress's negative image, he said in a statement.

"Whatever may be Naidu's political compulsions for his desperate actions, there is no credible alternative leader or party to challenge Prime Minister Narendra Modi or the BJP in national politics today. Naidu is making futile attempts at alliance building," the Rajya Sabha member said.

The postponement of the opposition meet is a severe setback to "desperate and spirited" efforts of Naidu, who is Andhra Pradesh chief minister, to cobble up a "United Corrupt Alliance" with many potential partners resisting his attempts to grab a central role for himself and projecting Gandhi as a leader of the alliance, Rao said.

Naidu met West Bengal Chief Minister Mamata Banerjee and asserted that all parties opposing the BJP were united in their endeavour "to save the nation" and will chalk out a strategy to take on the saffron party ahead of the winter session of Parliament.

He told reporters that the November 22 conclave of opposition parties which was to be held in Delhi has been postponed due to ongoing assembly elections and a fresh date for the meeting will be announced soon.

Rao said Naidu's potential partners may be wary of him as he has made "multiple opportunistic U-turns" in the recent past.

In April last year, Naidu had hailed PM Modi's leadership in glorious terms and mooted in an NDA alliance meeting that Modi be made the NDA's PM candidate again in 2019, Rao claimed.

"Naidu is seen in Andhra Pradesh as a U-turn CM running a very corrupt government. People of Andhra see Naidu's somersault as a political ploy to blame the BJP for his failures," he alleged.

Despite his frantic efforts, neither Naidu can save the Congress from a "Congress-mukt Bharat" (Congress-free India) nor his own party from "TDP-mukt Andhra Pradesh", Rao claimed.