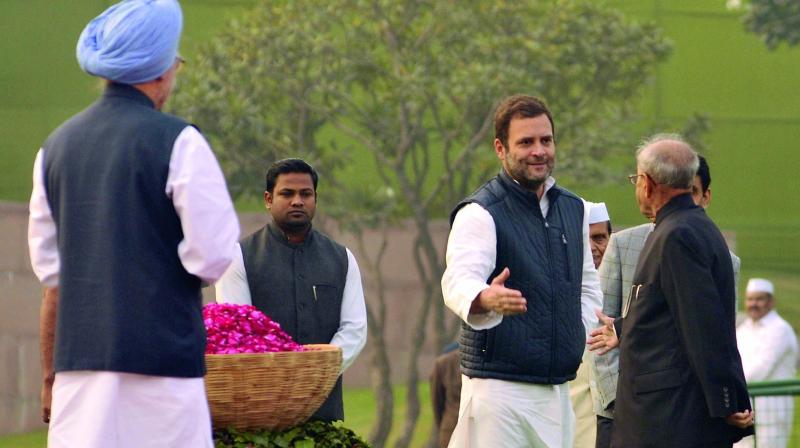 Describing Indira as “one of the greatest” Prime Ministers, Sonia Gandhi said there was only one religion for the late Congress leader, that all Indians were equal children of the motherland.

Messers Mukherjee and Mr Singh, besides Rahul Gandhi, paid floral tributes to her at her memorial, ‘Shakti Sthal’.

Often described as the 'Iron Lady of India', Ms Gandhi was born on this day in 1917 in Uttar Pradesh's Allahabad.

“No one can erase Indiraji’s memory,” Mr Mukherjee said at an event later at 1 Safdarjung Road, where Indira Gandhi was assassinated by her bodyguards on October 31, 1984. A photo exhibition has been organised there to mark her 100th birth anniversary. Ms Sonia Gandhi said Indira Gandhi took pride in India's rich diversity and its democratic and secular values.

Indira Gandhi also fought for India’s dignity and independence as a sovereign nation, against the dominance of superpowers, she said.

“And not only for India, but for all countries that resisted colonial and post-colonial forms of hegemony,” Ms Sonia Gandhi added. Rahul Gandhi recalled his grandmother, whom he described as his mentor and guide.

“I remember you Dadi with so much love and happiness. You are my mentor and guide. You give me strength. #Indira100,” he tweeted.

Congress communications incharge Randeep Surjewala said on Twitter that she worked tirelessly "to shape a new future" for the country. "...India first & India always. That was Indiraji! #Indira100," he said on the micro-blogging site.