Fair teaches how to save Hindu girls from ‘love jihad’

The VHP, along with Bajrang Dal and Rashtriya Swayamsevak Sangh (RSS) have also joined hands as organizers for the five-day event. 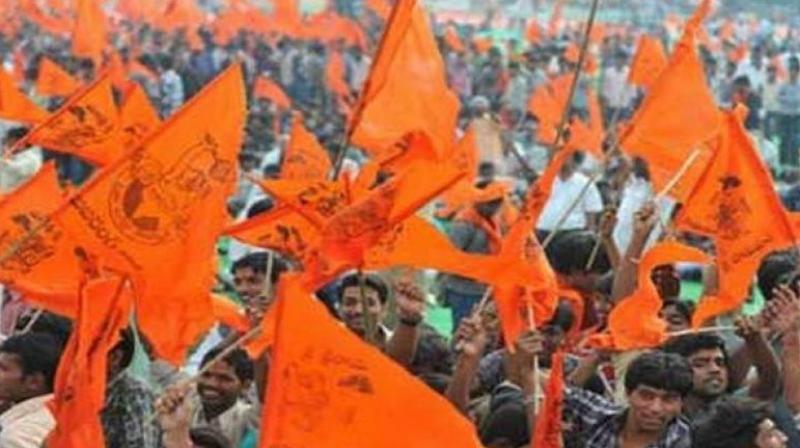 Jaipur: In a fair organised by Hindu Spiritual and Service Foundation in Jaipur, venomous literature against Muslims is being distributed. Muslim youngsters are accused of wooing Hindu girls in a bid to convert them to Islam. The education department recommended that fair should be attended by students of government and private schools.

In a chapter titled Jihad and Love Jihad: Hindu girls beware, Muslim men are out on a ‘Love Jihad’ mission, there is a detailed list of ways and methods being adopted by Muslim boys to lure and trap Hindu girls. Compiled by Vishwa Hindu Parishad and Bajrang Dal, the pamphlets and books mention that Muslim boys gain entry into Hindu households, chat with girls in a separate room, proclaim themselves as Hindus, run around doing their chores, indulge in intimate talks with girls.

The bigotry literature also used the image of actress Kareena Kapoor Khan to drive home the message and gave examples of actors Aamir Khan and Saif Ali Khan alleging that they married Hindu girls, ensnare them and then desert them. It further says that Muslim men, generally, sell girls and kill them in some cases and lists the money a Muslim man receives on converting a Hindu woman to Islam.

Another chapter gives instructions on how to save your daughter/sister from Love Jihad. “Check your daughter’s mobile phone, who does she call, whose numbers are saved in the mobile, what and who do they text, checking all this will give you a lot of information,” it suggests to know if a girl is falling prey to Love Jihad.

President Subhash Bapna feigned ignorance saying that he was in Udaipur while co-secretary of the HSSF and retired police officer Rajendra Singh Shekhawat denied that any material related to ‘Love Jihad’ is being circulated in the fair. “This is a spiritual fair and we are not distributing literature on ‘Love Jihad’,” he said.

When his attention was drawn that some stalls have been selling such stuff, he said, “There are several stalls. The organisers cannot keep eye on what is going on at every stall. However, we have checked and found no such material. This is a social fair to bring together and know about organisations working in the field of social service.”

Although, Mr Shekhawat denied that his organisation has anything to do with the Sangh but one of the addresses given on its website is same that of RSS headquarter in Jaipur.

The VHP, along with Bajrang Dal and Rashtriya Swayamsevak Sangh (RSS) have also joined hands as organizers for the five-day event.

Interestingly, the Rajasthan government had asked students of government and private schools to visit the ‘Spiritual Fair’ which has ‘promote respect for women’ as one of the themes this year. According to sources, education minister Vasudev Devnani had asked to issue the order for sending students to the fair. When contacted to know about the order, assistant district education officer (ADEO) Deepak Shukla referred to district education officer Ratan Singh. However, Mr Singh refused to answer saying he was busy and could not talk.