Government Railway Police Superintendent Maheshchandra Jain said that they have not received any official list of the victims of accident. 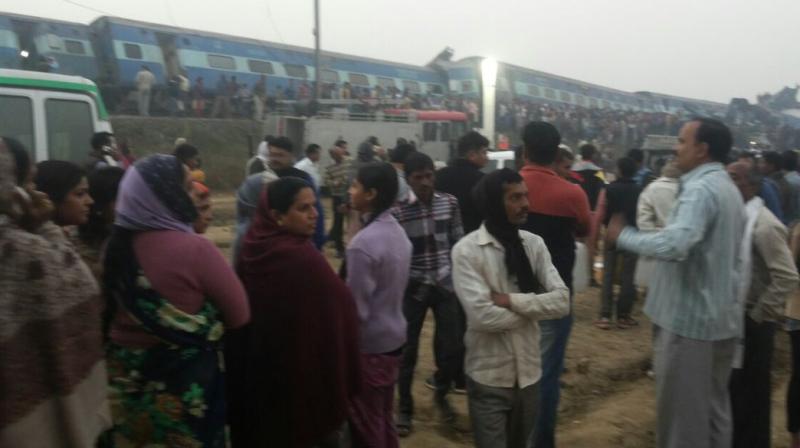 Officials carry out rescue work after around 90 people were killed and 150 injured when 14 coaches of the Indore-Patna express derailed in Kanpur Dehat.

Indore: Anxious relatives of nearly 200 passengers, who boarded the ill-fated Indore-Patna Express, rushed to the local railway station and made frantic inquires to know the whereabouts of their loved ones.

"Inquires pertaining to 200 passengers have come to us so far. We, along with the help from Railways, are gathering information," said Ajay Jha, a social worker, who was running a help centre with help of GRP at the railway station in Indore.

"The relatives of passengers who boarded (sleeper coaches) S-1, S-2 and S-3 are extremely worried as these coaches have faced the worst damage in the train derailment," he said.

Government Railway Police Superintendent Maheshchandra Jain said that they have not received any official list of the victims of the accident. But, the GRP was trying at its level to find out about the passengers who have not been in contact with their relatives after the mishap.

He said efforts were on to hire a special bus to send the relatives of the passengers, whose whereabouts are not yet known, to Bhopal from Indore.

"From the state capital, these people want to go to Kanpur dehat where the train derailed, to search for the dear ones," Jain said.

At least 96 passengers were killed and 226 injured, 76 of them seriously, when 14 coaches of the Indore-Patna Express derailed near Pukhraya in Kanpur dehat district in the wee hours today.