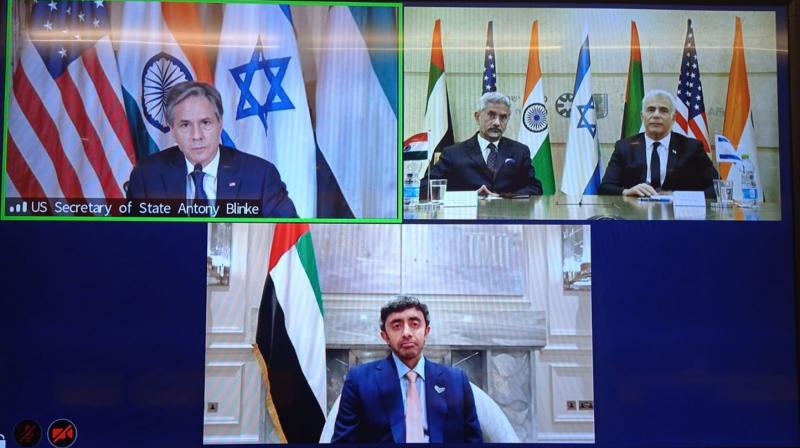 New Delhi: Cementing a new four-nation arrangement that is being spoken of as yet another “Quad”, this time in the Middle East, the United States on Tuesday said the foreign ministers of the US, Israel, India and the United Arab Emirates, who met at a virtual conference late Monday night, had “discussed expanding economic and political cooperation in the Middle East and Asia, including through trade, combating climate change, energy cooperation, and increasing maritime security”.

Announcing that the “intention is to hold an in-person meeting of the (four) ministers in the coming months at Expo 2020 in Dubai” (that is being held from October this year till March next year), Israel, in its separate statement, said the four ministers “decided to establish an international forum for economic cooperation” and had held a “discussion on the possibilities for joint infrastructure projects in the fields of transportation, technology, maritime security, and economics and trade, as well as for additional joint projects”. Stating that its foreign minister (and Alternate PM) Yair Lapid had “initiated the meeting during his visit to Washington” last week, Israel also said that “at the end of the conversation, it was decided that each minister will appoint senior-level professionals to a joint working group that will formulate options for cooperation in the aforementioned areas”.

External affairs minister S. Jaishankar, who participated in the meeting during his ongoing five-day visit to Israel, tweeted that the four ministers had a “fruitful first meeting” and had “discussed working together more closely on economic growth and global issues” while also “agreeing on an expeditious follow-up”.

The new arrangement has been formed at a time when China has been expanding its infrastructure projects, including the Belt and Road Initiative from Asia to Europe to Africa.

The US state department added: “Secretary Blinken and the Ministers also discussed people to people ties in technology and science, and how to support global public health in relation to the Covid-19 pandemic. The Secretary reiterated the Biden Administration’s support for the Abraham Accords and normalisation agreements and discussed future opportunities for collaboration in the region and globally.”

Israeli foreign minister Yair Lapid said at the meeting: “Around this virtual table -- there is a unique set of capabilities, knowledge, and experience that can be used to create the network that we all want to see created. I think the word we’re looking for here is synergy, because this is what we’re going to try and create starting with this meeting. Synergy that will help us work together on infrastructure, digital infrastructure, transport, maritime security and other things that preoccupy us all.” He added: “The key to success is how quickly can we move from ‘government-to-government’ to ‘business-to-business’? How quickly can we turn this into a working process that will put boots on the ground, changing infrastructure around the world.”

The virtual conference has sparked off enormous speculation on the new arrangement but some questions still remain unanswered. Of the four nations, India is the only one with close ties to Iran and these ties have become even more crucial with the fall of Afghanistan to the Pakistan-backed Taliban. Also, the UAE is seen to always act in tandem with Saudi Arabia, which is still hesitant to be seen openly on the same platform as Israel. But the US statement on the four nations expanding political cooperation in the Middle East and Asia and expanding maritime security is seen by observers as a very significant one. All four nations also have very close ties with each other. India had also welcomed the “full normalisation of relations” between the UAE and Israel in August 2020 and had then pointed out that both nations are its “key strategic partners”.