A division bench of Justices Sanjib Banerjee and Arijit Banerjee passed the order which will cover around 34,000 pujas 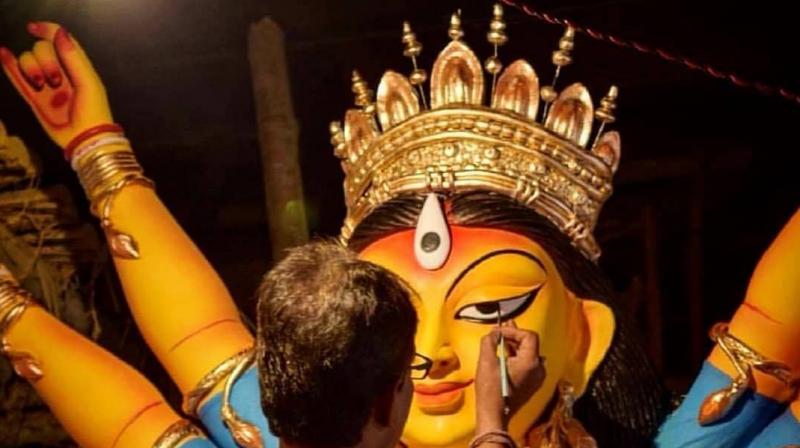 Durga puja is celebrated with a lot of zeal by Bengalis all over. (Photo: Instagram)

Kolkata: In a landmark ruling, the Calcutta high court on Monday declared all Durga Puja mandaps in West Bengal “no entry zones” for visitors after treating the pandals as “containment zones” to stop crowding, which is feared to trigger the superspread of the Covid-19 pandemic in the state during the festive season.

A division bench of Justices Sanjib Banerjee and Arijit Banerjee passed the order which will cover around 34,000 pujas, most of which are patronised by ruling Trinamul Congress leaders, in the state. The high court’s order came on Tritiya, which chief minister Mamata Banerjee had recently announced as the date for puja organisers to allow the revellers to visit the mandaps, three days ahead of the scheduled time.

The division bench laid down a set of guidelines after hearing a public interest litigation case on the state government’s permission to organise Durga Puja amid Covid-19 pandemic. One of them is that all the puja mandaps’ entrance will be barricaded with a “No Entry Zone” notice for puja revellers.

The division bench suggested that the revellers could watch the pujas “virtually”. Besides, only 15 members among organisers in case of a small puja will be allowed to be present at the mandap, while the number will be 25 in a big puja mandap. But their names will be displayed at the puja mandap’s entrance and it cannot be changed.

Also, a distance of five meters and 10 meters respectively will have to be maintained around the small and big puja mandaps. The distance will have to be measured from where the puja mandap’s boundary ends, said the petitioner’s advocate, CPI(M) Rajya Sabha MP Bikash Ranjan Bhattacharyya.

Expressing concern over photographs in the media of the puja shoppers’ crowds without any protection at various markets, the division bench said though the Mamata Banerjee government’s guidelines for the puja celebrations reflect its goodwill, these are not being applied in reality. It noted that Ganesh Utsav was not allowed in Mumbai due to the Covid-19 pandemic.

The bench wondered how the Kolkata Police, with a strength of around 30,000 personnel, would be able to look after crowd management at 3,000 pujas in the city alone, while ensuring law and order and tackling crime. It directed state director-general of police Virendra and Kolkata police commissioner Anuj Sharma to submit their compliance report on the subject after Lakshmi Puja but before November 5.