India   All India  20 Oct 2018  Women in India scared to come out: Rahul Gandhi hits out at BJP in Hyderabad
India, All India

Women in India scared to come out: Rahul Gandhi hits out at BJP in Hyderabad 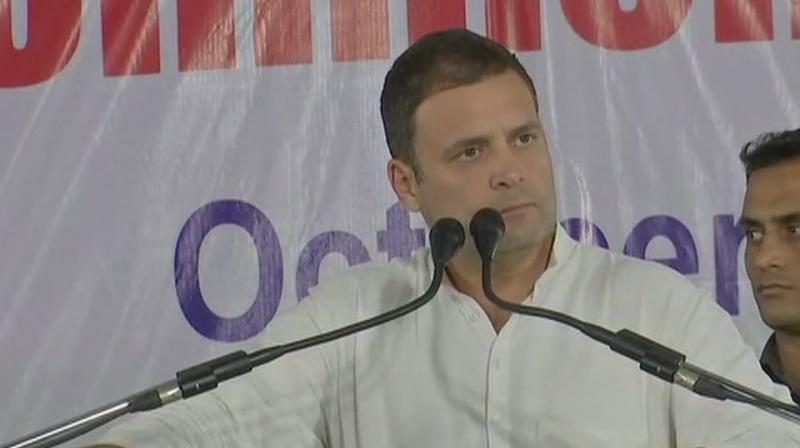 Hyderabad: Hitting out at the BJP-led NDA government at the Centre, Congress president Rahul Gandhi Saturday alleged fearing attacks, women in the country were now scared of coming out.

Gandhi also alleged that freedom fighter Veer Savarkar, who is worshipped by the BJP party as an icon of patriotism, wrote a letter to the British government to release him when leaders like Mahatma Gandhi were in prison. He said there were currently two ideologies in the country.

"One ideology is hatred and the other is spreading love. There is fight between these two. Wherever you see-Uttar Pradesh, Rajasthan, Madhya Pradesh Chhattisgarh, Tamil Nadu all over the country people are scared. Today it is being enquired about the religion, place and language of people. Whether it is Rohit Vemula or Dalit or Adivasi or Muslim, they are being threatened, why because there is some weakness in India now."

Turning to women, Gandhi said "Women today in India are scared to come out. They do not know what will happen to them. There is a reason for that. Today Prime Minister for the first time in India tries to divide the country, spreads hatred. Similarly his supporters also spread hatred," he said.

Rahul Gandhi was addressing a gathering on the occasion of 'Rajiv Gandhi Sadbhavana Yatra commemoration day' at Charminar.

He said many leaders like Jawaharlal Nehru, Sardar Patel and Rajiv Gandhi tried to keep the country united and everybody in this country has a right to live peacefully as provided by the Indian constitution.

"Why is MIM (All India Majlis-e-Ittehad-ul Muslimeen) supporting the PM when he is trying to divide the country.One after another state, MIM is supporting the PM. Because they (both BJP and MIM) think on similar lines. We are fighting with both them," the congress leader said. Attacking Veer Savarkar, Gandhi said "Prime Minister Narendra Modi kept the portrait of Veer Savarkar in Parliament....When Britishers were ruling this country, when all the Congress leaders were in prison, Veer Savarkar wrote a letter to the British. He was not veer (gallant)."

The congress president alleged that Savarkar wrote that he would do anything for them (British).

Hitting out at the Prime Minister, the congress leader said "Modi insults the nation by saying India was sleeping and there was no development before he came to power."