'Will visit again after I turn 50': 9-yr-old girl with placard at Sabarimala

Janani's father said 'he won't like it' if his daughter visits Sabarimala before she is 50. 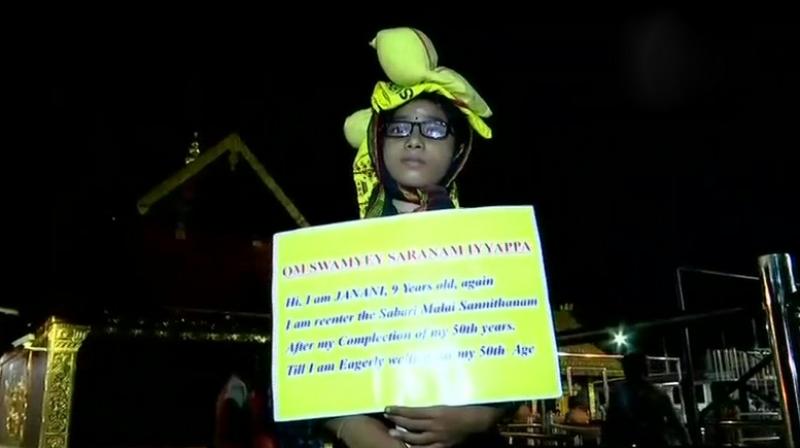 Janani, who comes from Madurai in Tamil Nadu, visited the temple with her parents on Friday. (Photo: Twitter | ANI)

Sabarimala (Kerala): A nine-year-old girl from Madurai grabbed public attention at Sabarimala after she was seen with a placard, which read she will again visit the hill shrine to have darshan of Lord Ayyappa after she crosses 50. Janani, who comes from Madurai in Tamil Nadu, visited the temple with her parents on Friday.

"We don't know what the Supreme Court ordered. I feel that once my daughter completes 10 years of age, she will wait till 50 and then can visit Lord Ayyappa. We love our Ayyappa," said Janani's father R Satish Kumar, adding that "he won't like it" if his daughter visits Sabarimala before she is 50. 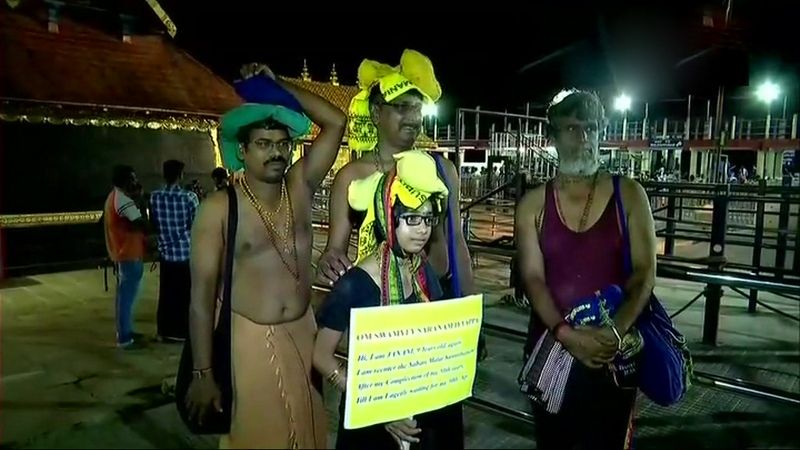 Tension intensified the renowned Sabarimala temple on Friday after two women, with tight police escort, walked the 5-kilometre track from the base camp at Pamba to Sannidhanam, to reach the 18 holy steps that take devotees to the inner temple compound.

The women, Hyderabad based journalist and an activist, had to return after hours of standoff, as the head priest and 30 other temple employees, sat on the steps and clapped and sang Ayyappa songs to block their entry.

The head priest also threatened to shut the temple and stop puja if the women entered.

In a letter, the Pandalam Palace Trust last evening wrote to the Sabarimala shrine administrators, asking them to shut down the temple if any ritual was broken. The Trust belongs to the Pandalam royal family of Kerala, which is historically known for its kinship with Ayyappa.

The letter also stated that the temple should be re-opened only after the tantri cleanses the shrine.

The Pandalam Royal family had earlier said that if women of all ages are allowed to enter the temple then Lord Ayyappa would curse devotees.

The Supreme Court in a historic verdict on September 28, lifted the centuries-old ban on entry of women of menstruating age (10 to 50 years) and instructed the authorities to ensure that nobody was discriminated against.