India   All India  20 Oct 2018  Train mows down people during Dussehra celebrations in Amritsar
India, All India

Train mows down people during Dussehra celebrations in Amritsar

Sound of firecrackers prevented people from noticing train bearing down on them at breakneck speed. 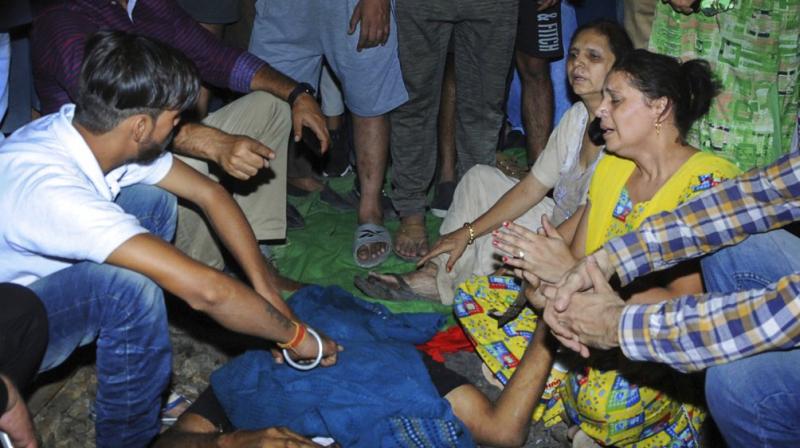 Relatives mourn near a victim at the site of a train accident at Joda Phatak in Amritsar. (Photo: PTI)

Amritsar: A disturbing video footage has shown scores of Dussehra revellers watching the burning of Ravana effigy being mowed down by a passing train on Friday evening.

The incident left at least 61 people, including women and children, dead after a crowd of Dussehra revellers had spilled onto the railway tracks while watching burning of Ravana effigy and were run over by a train.

The video shows many across the railway tracks filming the celebrations on their mobile phones when the tragedy struck.

Sound of firecrackers exploding prevented at least 300 people from noticing a train bearing down on them at breakneck speed while they were watching ‘Ravan dahan’ at a ground adjacent to the tracks.

By the time a few turned their attention towards the railway track they were standing on, it was already too late.

The video shows an open ground almost completely covered in darkness, save for a towering pillar of fire formed due to the burning of Ravana's effigy and the lit screens of numerous mobile phones busy clicking photographs and recording video.

As the effigy was lit and the fireworks went off, a section of the crowd started retreating towards the tracks where a large number of people were standing to watch the event, officials said.

Crackers continued to burst continuously, fading out every other sound -- including that of the speeding train approaching.

The train from Pathankot enters the frame almost 30 seconds into the clip.

Two trains arrived from the opposite direction at the same time giving little time to people to escape, officials said. A number of revellers were mowed down by one of the trains.

In the backdrop, firecrackers continue to burst.

Wails and cries filled the air as friends and relatives frantically looked for their near and dear ones. Severed bodies, including of children, were lying at the site hours after the accident with angry people not allowing authorities to remove them. It was a heart-rending sight as the dismembered body parts laid strewn on the blood-soaked ground, and many were difficult to be identified, eyewitnesses said.

A Northern Railways official said the effigy was being burnt less than 100 metres from the railway track.

#WATCH The moment when DMU train 74943 ran over people who were watching #Dussehra celebrations in Choura Bazar near #Amritsar (Source Unverified) pic.twitter.com/XJN37vB0md

“What a mindless and entirely avoidable tragedy. Watching this video you’d be hard pressed to imagine the scale of the tragedy considering the way people are nonchalantly filming away on their phones even after the train has run over people,” former Jammu and Kashmir chief minister Omar Abdullah tweeted.

What a mindless & entirely avoidable tragedy! Watching this video you’d be hard pressed to imagine the scale of the tragedy considering the way people are nonchalantly filming away on their phones even after the train has run over people! https://t.co/3sUr2KOA6O

Navjot Kaur Sidhu, Congress leader and wife of Cricketer-turned-Punjab Minister Navjot Singh Sidhu, was the chief guest at the event. She has denied leaving the scene of the tragedy after the accident.