The devotees, including senior citizens and children chanting Ayyappa mantras, protested the entry of women of menstrual age group into the shrine. 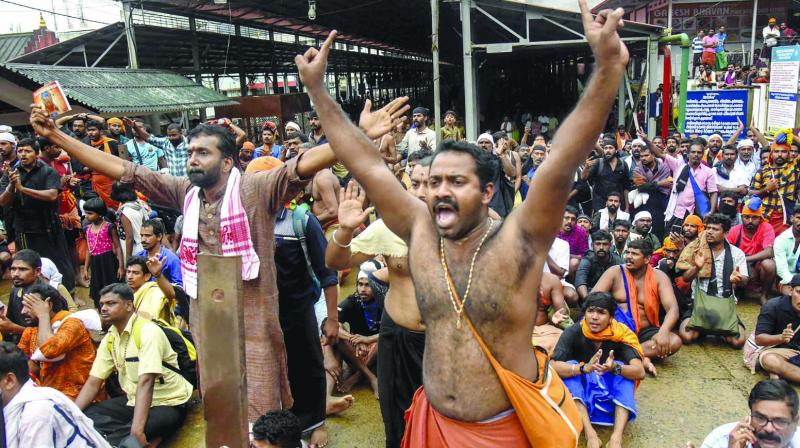 Protesters oppose the entry of women to the Sabarimala temple in Kerala. (Photo: PTI)

Sabarimala/Thiruvananthapuram: The Sabarimala temple complex witnessed high drama and tense moments on Friday when two women reached the hilltop with heavy police escort, but had to return before reaching the sanctum sanctorum following massive protests by Lord Ayyappa devotees.

As the two were returning, a 46-year-old woman also made an attempt to trek the forest path from downhill Pamba to the temple complex five km away, but retracted following protests from devotees.

In a significant development, the Travancore Devaswom Board, that manages the shrine, said it would approach the Supreme Court to defuse the tense situation prevailing in the state after the government decided to implement the apex court order on entry of women of all age groups into the shrine.

In an advisory, the Union Home Ministry has asked Kerala, Tamil Nadu and Karnataka to tighten security in view of the continuing protests against the SC verdict.

Earlier in the day, when the two women, one identified as a Hyderabad-based reporter in her late 20s, and a Kochi based activist reached the hilltop, a large number of devotees blocked them at Valiya Nadappandhal, the queue complex located a few metres away from the holy “pathinettam padi” (the 18 sacred steps), leading to the sanctum sanctorum.

The devotees, including senior citizens and children chanting Ayyappa mantras, protested the entry of women of menstrual age group into the shrine. Tension was defused after the women agreed to return as the state government made it clear it did not want to take them to the Sannidhanam, the temple complex, by using force against the protesting devotees.

The firm stand taken by the “tantri” (head priest) that he would close the temple if the women were escorted into the sanctum sanctorum also persuaded them to return as per instructions of the police.

Though the women had earlier insisted they should reach the shrine, the police later convinced them about the gravity of the situation and conveyed the stand taken by the government and the head priest.

If they had reached the shrine, they would have been the first women from the menstruating age group to visit the Lord Ayyappa temple at Sabarimala after the apex court order permitting women of all age groups to enter the shrine.

Devotees received his announcement with thunderous chanting of “Swamiye Saranam Ayyappa”. Besides devotees, a group of “parikarmies”, temple employees assisting priests in puja, also squatted on the holy steps and protested taking the women to the shrine complex. As the situation appeared to be going out of control with the protesters blocking the way sitting on the floor, Sreejith told them they were only implementing the law but there was no plan to go forward by hurting their sentiments.

State Devaswom minister Kadakampally Surendran, who was in Thiruvanathapuram, said the government was not ready to use force and hurt the sentiments of devotees.

He also said one of the women was later identified as an activist and holy Sabarimala was not a place to show their strength and activism. “The government has the duty and responsibility to implement the Supreme Court order and give protection to devotees but not for activists,” Mr Surendran said.

“Police should have examined the veracity and background of the women who came to trek to the shrine,” he added.

With the protests at Sabarimala intensifying, state police chief Loknath Behera called on governor P. Sathasivam and updated him about the situation. “This follows the Honourable governor seeking information about the law and order situation in Sabarimala and adjoining areas in the wake of the protests against the possible entry of women into the temple,” a Raj Bhavan release said. Mr Behera explained that the situation was under control and that the police was equipped to provide protection to genuine devotees who wanted to offer prayers at Sabarimala, it said.

TDB president Padmakumar said the board would file a detailed report in the apex court on the situation at Sabarimala and adjoining areas when the government tried to implement the order. It would also file a similar report in Kerala high court with a view to resolving the present crisis.

“TDB is for resolving the issue and there is no politics for the board...”  Asked if the board would file a review plea against the apex court order, he said the TDB was a respondent in all the review petitions filed against the present judgment and now pending in the Supreme Court.

Madhavi, a devotee from Andhra Pradesh, and a New Delhi-based woman journalist were also forced to return following intense protests by devotees in the past two days.