Vinod Bansal was responding to comparison drawn by Yechury between violence in Sabarimala and uproar during Babri Masjid demolition. 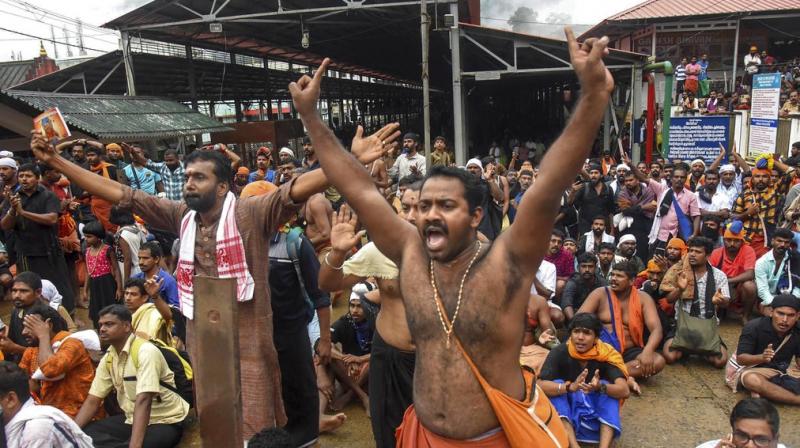 CPI(M) general secretary Sitaram Yechury had termed the violence witnessed in Sabarimala as 'the worst form of vote bank politics being played in the country at the expense of destroying social harmony.' (Photo: PTI)

New Delhi: Responding to the comparison drawn by Communist Party of India (Marxist) (CPI-M) general secretary Sitaram Yechury between the violence in Sabarimala and the uproar witnessed during the demolition of the Babri Masjid in Ayodhya, Vishwa Hindu Parishad (VHP) spokesperson Vinod Bansal said the Sabarimala Temple was southern India's Ayodhya.

Speaking to ANI, Bansal thanked the devotees who have been aggressively protesting against the Supreme Court's verdict that quashed restrictions imposed on the entry of women into the Sabarimala temple.

"Good that Sitharam Yechury has himself compared Sabarimala with Ayodhya because yes Sabarimala is South's Ayodhya. The way sanctity, religious belief and the serenity of Sabarimala have been attacked shows the reality of the CPI (M). The CPI (M) remains blind and ignorant on Kerala nun suffering, the way non-Hindus are appointed in Travancore Devaswom Board. I appreciate and thank the people who are protesting and saving the sanctity of the temple," the VHP spokesperson said.

On October 19, Yechury had termed the violence witnessed in Sabarimala as "the worst form of vote bank politics being played in the country at the expense of destroying social harmony."

"All the TV crews who went there which had women were roughed up; the pattern is very similar to the time of the Babri Masjid demolition. You have the heads of the volunteers wearing saffron bands, the same dress you found there then," he added.

Alleging that the RSS is involved in the temple violence, the CPM general secretary underscored: "Similar thing is being done here (Sabarimala Temple). The RSS is doing this."

Three days after the Sabarimala Temple in Kerala opened its doors for the first time for women of all age groups as per the Supreme Court verdict pronounced on September 28, no woman of menstrual age has yet been able to visit the shrine because of continuous protests.

A number of devotees blocked the entry of women trekking up to the hill shrine. The doors of the temple opened on Wednesday at 5 pm and will close on October 22.

While reacting on delaying of construction of Ram Temple in Ayodhya, Bansal asserted, "The Ram Temple construction should start as soon as possible. I have full faith that the Supreme Court's verdict on October 29 will be on Ram Temple's favour."

The Babri Masjid, built by Mughal emperor Babur in Ayodhya in 1528, was, on December 6, 1992, pulled down allegedly by a group of Hindu activists, claiming that the mosque was constructed after demolishing a Ram Temple that originally stood there.