India   All India  20 Oct 2018  'Right to tweet': Subramanian Swamy as Cong accuses him of 'influencing' Herald case
India, All India

'Right to tweet': Subramanian Swamy as Cong accuses him of 'influencing' Herald case

Swamy was responding to Vora's application seeking court's order to restrain him from tweeting about the case. 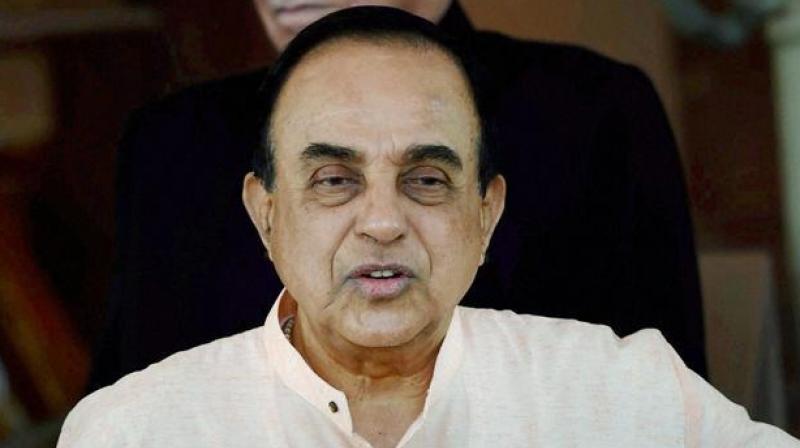 Vora had earlier told the court that Swamy was indulging in 'character assassination' of the accused persons by tweeting. (Photo: File)

New Delhi: Refuting allegations that he was trying to influence the proceedings in the National Herald case with his tweets, BJP leader Subramanian Swamy on Saturday told a Delhi court that he does not remember the social media posts cited by the Congress.

Swamy was responding to Congress leader Motilal Vora's application seeking the court's order to restrain him from tweeting about the case in which Vora is an accused along with his party chief Rahul Gandhi and mother Sonia Gandhi.

The Bharatiya Janata Party (BJP) told the Additional Chief Metropolitan Magistrate Samar Vishal that he was afraid that the tweets cited by Vora “may be tampered with”, but maintained that he had “every right to tweet”. “I can't remember the tweets. I made countless tweets and do not know whether those cited by the applicant (Vora) are mine,” Swamy said. “The copies of tweets are not admissible under law and do not count as evidence to press on their application. If I do not know what are the evidence, how will I proceed further? I have every right to tweet. But the evidence you claim are not evidence since they are not certified,” he added.

He further argued that there was no evidence that his tweets were defamatory and therefore, Vora's application should be "dismissed". “They have not brought anything to show that the tweets, even if true, are defamatory to anyone. This is a case of corruption. it contains public interest. The country is moving to a more open society," Swamy said. "There is no evidence in this case and this application should be dismissed with a cost,” he added.

Senior advocate R S Cheema, representing Vora, said Swamy did not deny the allegations in the written submissions filed by the BJP leader. “This is contempt of court. When we filed application citing tweets, he did not deny them in his written submissions. He is interfering with my work as an advocate,” Cheema said, after which the court reserved its order on the application for November 17.

The BJP leader, in a private criminal complaint, had accused the Gandhis and others of conspiring to cheat and misappropriate funds by paying just Rs 50 lakh, through which Young Indian Pvt Ltd (YI) obtained the right to recover Rs 90.25 crore that Associate Journals Ltd owed to the Congress.

Vora had earlier told the court that Swamy was indulging in "character assassination" of the accused persons by tweeting.

"The complainant (Swamy) is also insulting the lawyers appearing for the accused persons and trying to influence the ongoing probe by commenting on the merits of the case," the counsel had said.

Vora, also represented by advocate Tarannum Cheema, had requested the court to pass an injunction order restraining Swamy from tweeting about the case. In his application, Vora said he has time and again noticed that the complainant (Swamy) has been putting up various posts on social media regarding the daily proceedings of the case to defame the accused and for the vilification of the court process.

Vora also alleged that Swamy had been indulging in "loud and persistent publicity", amounting to an interference with the administration of justice.

The application said, "Before and after every date of hearing he (Swamy) unleashes hostile publicity through tweets, posts on social media or statements to the media." All the seven accused — the Gandhis, Motilal Vora (All India Congress Committee treasurer), Oscar Fernandes (AICC general secretary), Suman Dubey, Sam Pitroda and YI — have denied the allegations levelled against them in the case.

The court had summoned the accused persons, besides YI, on June 26, 2014. On December 19, 2015, it had granted bail to Sonia Gandhi, Rahul Gandhi, Vora, Fernandes and Dubey, who had appeared before it pursuant to summonses.

Pitroda was also granted bail on February 20, 2016 when he had appeared in the court. Sonia Gandhi, Rahul Gandhi, Vora, Fernandes, Dubey and Pitroda had been summoned for the alleged offences of misappropriation of property, criminal breach of trust and cheating, read with criminal conspiracy of the Indian Penal Code.