Railway officials said that the accident was a 'clear case of trespassing' and no permission was granted for the event. 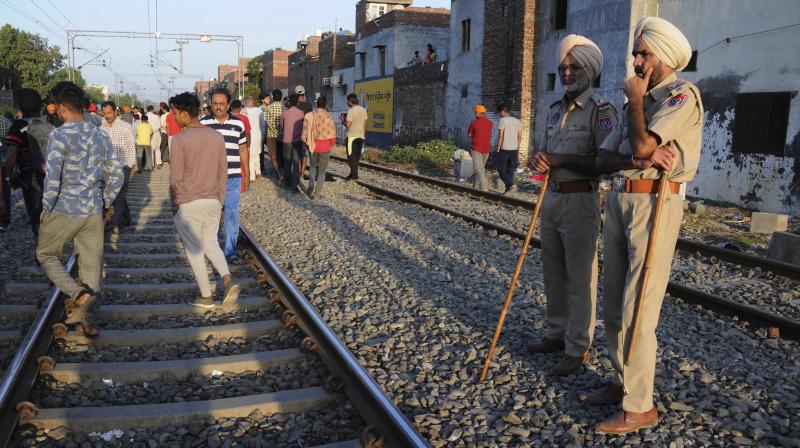 Medical teams were rushed to the site of the accident in which at least 61 people, including women and children, died. (Photo: PTI)

Amritsar: The gathering of people close to tracks near Amritsar where a train mowed down Dussehra revellers was a "clear case of trespassing" and no permission for the event had been given by the railways, a senior official said.

Minister of State for Railways Manoj Sinha Saturday ruled out any punitive action against the driver of the train, saying there was no negligence on the part of the national transporter and also advised people not to organise such events near tracks.

The railways has maintained that it was not at fault because it had no intimation about the Dussehra event. "The incident was not a railways' fault. There was no lapse on our part and no action against the driver will be initiated. People should refrain from organising such events near tracks in future. I think if precaution had been taken, the accident could have been averted," he said, adding wherever such events are held, the district administration concerned gives permission.

Amid questions being raised in some quarters about why the train did not stop despite such a large crowd being there, the official said, "There was so much smoke that the driver was unable to see anything and he was also negotiating a curve."

Vivek Kumar, the Divisional Railway Manager, Ferozpur, said the driver has been questioned but no lapse could be found at his end. He said that while the train was travelling at a speed of 91 km/hr but after spotting the crowd on the track, it slowed down to 68 km/hr before the first impact.

"We were not kept in the loop and we provided no permission for the event. It is a clear case of trespassing and the local administration should take responsibility," a railway official said.

Medical teams were rushed to the site of the accident in which at least 61 people, including women and children, died and 72 were injured after the train coming from Jalandhar to Amritsar ran over a crowd standing across the tracks to watch the Dussehra celebration.

Railway officials also said they were unlikely to compensate the family of the dead as they were not passengers.