India   All India  20 Oct 2018  Migrant workers from UP, Bihar among most dead in Amritsar train tragedy
India, All India

Migrant workers from UP, Bihar among most dead in Amritsar train tragedy

The accident has claimed 61 lives so far out of which 39 bodies have been identified by the authorities. 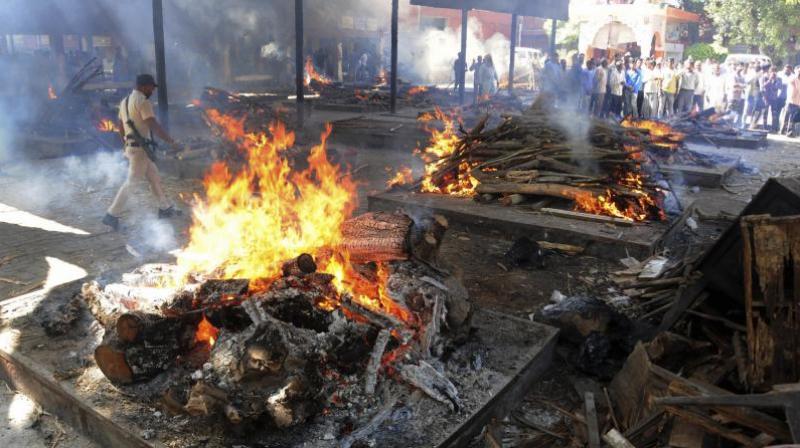 Amritsar: Most people who were mowed down by a speeding train in Amritsar during Dussehra celebrations Friday evening were migrant workers from Uttar Pradesh and Bihar, an official said here Saturday.

The accident has claimed 61 lives so far out of which 39 bodies have been identified by the authorities. A senior official in the district administration said most migrant workers from Uttar Pradesh and Bihar work in an industrial area at a stone's throw away from the accident site and live nearby.

The Dussehra celebration gathering Friday evening had a good number of people who belonged to these two states as the festival is celebrated with great devotion back in their hometowns, he said.

"As per initial reports, most of deceased were migrant workers from Uttar Pradesh and Bihar and were working in the industrial area to earn their livelihood," the official said.

The official, however, did not give an exact breakdown of numbers as 20 bodies were yet to be identified. Jagunandan, a 40-year-old wage labourer from Hardoi in Uttar Pradesh who suffered injuries in the head and leg, said he was not standing near the tracks but was pushed as people started running away from the main stage after the Ravan effigy was set afire.

The father of four was brought to a hospital by a relative, who accompanied him to the event. The district administration is providing all possible help to the family members of deceased in sending bodies to their hometown, another official said.

Since morning, a large number of people have been sitting on railway tracks where the accident took place due to which train services have been suspended on this line. Angry people are raising slogans against the state government, saying that it did nothing to ensure proper security arrangements for the Dusshera event.

The Punjab government has ordered magisterial inquiry to ascertain the reason behind the tragic accident.