At least 61 people died near Amritsar when train ran through crowd that had assembled across tracks to watch Dussehra event. 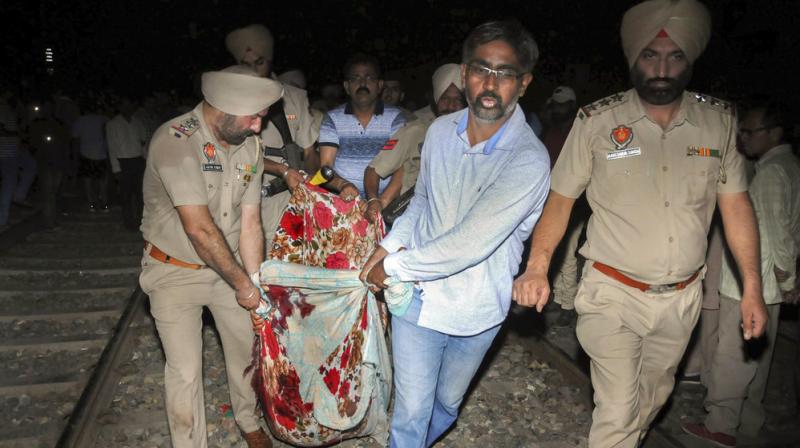 Police and volunteers carry a victim from the site of a train accident at Joda Phatak in Amritsar. (Photo: PTI)

Amritsar: As scores of Dussehra revellers watching the burning of Ravana effigy were mowed down by a passing train near Amritsar, the disturbing video footage of the accident showed many across the railway tracks filming the celebrations on their mobile phones when the tragedy struck.

At least 61 people died and many more injured in the accident between Manawala and Ferozpur stations near Amritsar, when the train ran through the crowd that had assembled across the tracks to watch the Dussehra event.

Punjab minister Navjot Sidhu's wife Navjot Kaur Sidhu, who was the chief guest at the programme, later said nobody knew how the accident happened as people were enjoying and also taking selfies standing on the tracks.

Many, including political leaders, took to Twitter to express dismay over the selfie culture during such tragic incidents.

"What a mindless & entirely avoidable tragedy! Watching this video you'd be hard pressed to imagine the scale of the tragedy considering the way people are nonchalantly filming away on their phones even after the train has run over people!," former Jammu and Kashmir chief minister Omar Abdullah tweeted.

Aam Aadmi Party leader Preeti Sharma Menon tweeted, it was so unbelievable that the train ran over the crowd "and they continued filming".

Video footage of the accident on television channels showed several mobile phones flashing from across the tracks when the horrific accident occurred.

During several other tragedies in the past, people were seen taking selfies, which has been criticised by many as apathy and disrespectful towards the victims.