India   All India  20 Oct 2018  Arunachal Pradesh on edge over fears of river flooding
India, All India

Arunachal Pradesh on edge over fears of river flooding

The river, originating in the Tibetan plateau, is the source of India’s mighty Brahmaputra river which is the lifeline of the Northeast. 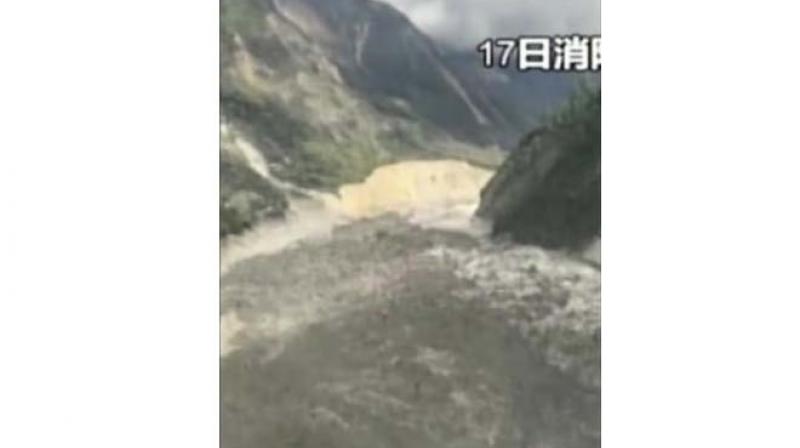 This image shows a landslide and barrier lake on Yarlung Tsangpo in Tibet in western China. (CCTV via AP Video)

New Delhi/Guwahati: The authorities of Arunachal Pradesh have issued an alert warning villagers in the East Siang district, the area bordering China’s Tibet region, not to venture near the Yarlung Tsangpo river. The warning has been issued after Chinese emergency services on Thursday evacuated about 6,000 people after a landslide in Tibet, which has blocked the flow of one of the region’s key rivers, created a “barrier lake” that could endanger downstream areas in India. The district magistrate of Arunachal’s East Siang district Tamiyo Tatak told reporters that water levels in the river had fallen drastically due to blockage and once it (the blockage) collapses or is cleared in China, water might suddenly rush downstream, causing a disaster in India’s Northeast.

In a statement issued from its embassy in New Delhi, China said it was working closely with India in sharing hydrological inputs under the emergency information sharing mechanism. Be-ijing said the “positive gesture” was part of the “Wuhan Consensus”, a reference to the informal summit at Wuhan in China between Chine-se President Xi Jinping and Prime Minister Narendra Modi.

The river, originating in the Tibetan plateau, is the source of India’s mighty Brahmaputra river which is the lifeline of the Northeast. Yarlung Tsangpo becomes phenomenally wider and is called the Siang downstream from Arunachal Pradesh. After reaching Assam, the river is known as Brahmaputra.

In a statement on the landslide, Chinese embassy spokesperson and counsellor Ji Rong said, “On the early morning of October 17, a landslide took place near Jiala Village in Milin County in the lower ranges of Yaluzangbu River (Chinese name of the Yarlung Tsangpo) in Tibet Autonomous Region of China… The Chinese side will closely monitor situation of the barrier lake, and continue to notify the Indian side the follow-up developments through bilaterally agreed channels timely. The Chinese side has been keeping close communication with the Indian side on Yaluzangbu River hydrological information this time, reflecting another positive gesture of implementing the Wuhan consensus between our two leaders.”

The collapse on Wednesday morning of a cliff in the deep valley through which the river flows created a dam-like barrier on the Yarlung Tsangpo, the local emergency response bureau said in a report carried by the state media of China.

In June, 2000, a sudden high discharge of water from the Yarlung Tsangpo had caused extensive damage in Arunachal Pradesh and other downstream areas in India. Arunachal East MP Ninong Ering has alleged that landslides in China, which have blocked the Milin section of the Yarlung Tsangpo river (sometimes called Yarlung Zangbo), since the intervening night of Tuesday and Wednesday may have an impact on the lower reaches of the river in India.

In a letter written to external affairs minister Sushma Swaraj and MoS water resources Arun Ram Meghwal, Mr Ering apprised them of the current situation and said that the Chinese side is closely monitoring the situation. He also asked the Central government to proactively engage with the Chinese authorities over the matter.

The Chinese Embassy Spokesperson meanwhile said, “In April this year, President Xi Jinping and PM Modi reached important consensus on promoting China-India all-round cooperation during the informal summit in Wuhan. In June, the two leaders met on the sidelines of SCO Qingdao Summit, and witnessed the signing of the MoU concerning cross-border river cooperation. I believe, with the joint efforts of both sides, China and India will carry out more positive and pragmatic cooperation in more fields and continuously push forward the healthy and stable development of bilateral relations.”