Some said people could not hear the sound of the approaching train due to bursting of fire-crackers. 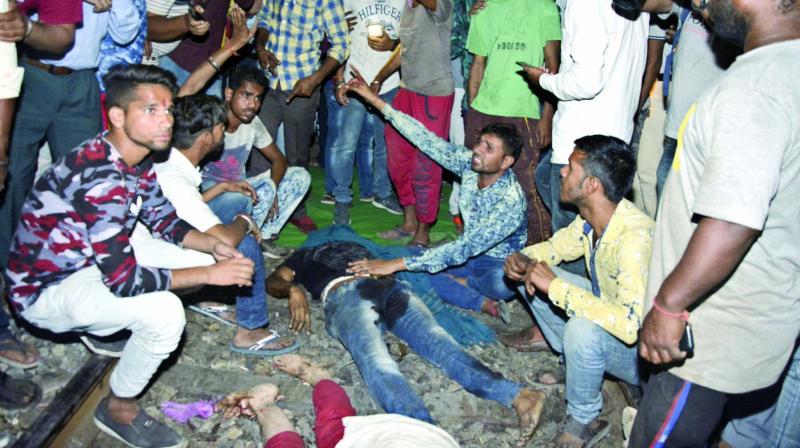 Amritsar: In a horrific tragedy that could have been avoided, at least 58 people were killed and 72 injured Friday evening after a 300-strong crowd of Dussehra revellers, who had spilled onto railway tracks while watching burning of Ravan effigy, was run over by a train near here.

The train was going from Jalandhar to Amritsar when the incident occurred at Joda Phatak where, officials said, at least 300 people were watching “Ravan dahan” at a ground adjacent to the tracks.

Sub-divisional magistrate Amritsar (I) Rajesh Sharma said 58 people have died and at least 72 injured have been admitted to Amritsar hospital. However, Raveen Thukral, media advisor to chief minister Amarinder Singh, put the number of dead at 40, adding the toll could rise.

As the effigy was lit and fireworks went off, a section of the crowd started retreating towards the tracks where a large nu-mber of people were alre-ady standing to watch the event, officials said.

However, two trains arrived from the opposite direction at the same time, giving little opportunity to people to escape, they said.

Several people were mowed down by one of the trains, they said. Some said people could not hear the sound of the approaching train due to bursting of fire-crackers.

Wails and cries of people filled the air as friends and relatives frantically looked for their near and dear ones. Severed bodies, including of many children, were still lying on the accident site hours after the incident with angry people not allowing authorities to remove them.

It was heart-rending sight as the dismembered body parts laid strewn on the blood-soaked ground. Many bodies could not be identified.

People shouted slogans against local MLA Navjot Kaur Sidhu, who was present as chief guest during the event. She later said she rushed to the hospital immediately after the incident. She said the railways should have ensured that trains slow down near that section of the track during Dussehra celebrations.

“Every year, Dussehra celebrations take place there,” she said, adding she had left the place before the incident took place. There was shock and disbelief as panic-stricken people recounted the horror.

“I have lost my minor child. I want him back,” an inconsolable mother could be heard.

“Several times we have been requesting the authorities and local leaders telling them to take up the issue with railway authorities to slow down the trains near this phatak during Dussehra, but no one has listened,” a local said.

Amritsar police commissioner S.S. Srivastava said there was a great rush because of the Dussehra celebrations, adding necessary action as per law would be taken.

A state mourning has been announced in Punjab on Saturday, and Amarinder Singh has ordered an inquiry into the incident.

“I am at the moment not aware of the reasons for this Ravan effigy being built next to a railway station. But the administration will look at it and we will check it when I go there tomorrow,” he said.

Mr Singh, who was scheduled to leave for Israel this evening, has postponed his trip and will fly to Amritsar Saturday morning. He announced compensation of Rs 5 lakh each to the kin of the deceased.

He also directed the chief secretary to deploy all the necessary administrative officials to ensure that the injured are immediately shifted to hospitals across Amritsar. All private hospitals have also been asked to stay open, along with government hospitals, to provide urgent free treatment and care to the injured.

Additional police forces, led by the DGP, have been rushed to the spot to control the situation.

The incident sent shock waves across the country. There was an outpouring of grief with President Ram Nath Kovind and Prime Minister Narendra Modi condoling the loss of lives.

Mr Modi announced Rs 2 lakh compensation for the family of the dead and Rs 50,000 for the injured. He also directed officials to provide immediate assistance.

“Extremely saddened by the train accident in Amritsar. The tragedy is heart-wrenching,” he tweeted.

“My deepest condolences to the families of those who lost their loved ones and I pray that the injured recover quickly. Have asked officials to provide immediate assistance that is required,” he said.