PM said modern infrastructure will be built preserving the traditional soul of Kedarnath and not flouting environmental laws. 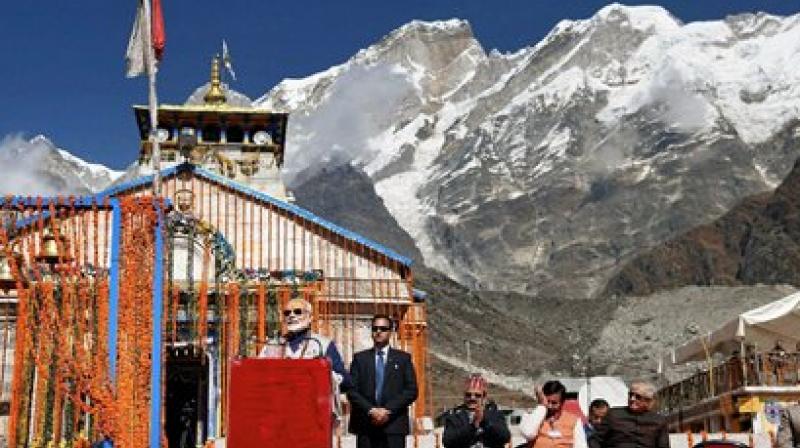 Kedarnath (Uttarakhand): Prime Minister Narendra Modi on Friday offered prayers at the Kedarnath shrine and hit out at the Congress, saying he was not allowed to carry out redevelopment work after the 2013 deluge when he was Gujarat chief minister.

As chief minister of Gujarat, he had offered to take the responsibility of reconstructing areas surrounding the temple when the tragedy had struck in 2013, killing thousands of people, Modi said.

"The then Uttarakhand chief minister had also agreed in principle. But the then government at the Centre apparently had reservations about it and I had to return, However, perhaps Baba (Lord Shiva) had decided that the reconstruction
around Kedarnath will be done by Baba's son only," he said.

The PM also said his visit to the Himalayan temple had strengthened his resolve to serve the nation.

The Himalayan shrine, dedicated to Shiva, will be closed from Saturday for six months owing to winter.

Serving people was true service of the lord, the Prime Minister said after offering 'rudrabhiskek' at the high altitude shrine.

"Seek blessings of Bhole Baba and resolve to devote myself to fulfilling dream of a developed India by 2022," Modi told a gathering of officials, priests and locals at the mountain shrine.

Modi, who had visited the shrine in May this year, also laid the foundation stones of five major reconstruction projects at Kedarpuri. These include improved facilities for devotees, construction of retaining walls and ghats at the Mandakini and Saraswati rivers, an approach road to the shrine and reconstructing Adi Guru Shankaracharya's tomb which was devastated in the 2013 deluge.

The Prime Minister spoke of making Kedarnath a tourist destination and also invited the people to visit and explore the Himalayas.

PM said that quality infrastructure will be built preserving the traditional soul of Kedarnath without flouting the laws of environment.

He described the projects as ambitious and expensive but said there would be no dearth of funds to ensure that they are completed in a time-bound manner.

Modi had visited in May when the portals of the Himalayan shrine were reopened for devotees after remaining closed for six months for the winters.

Modi also saluted the people of Uttarakhand for their discipline.

"Discipline is in the blood of people here in Uttarakhand, at least one person from each family here is a soldier," he said.