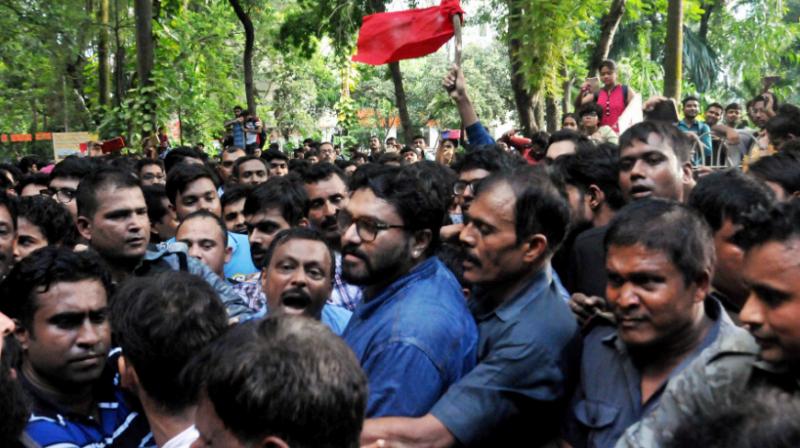 Supriyo was on Thursday shown black flags and heckled by a section of students at Jadavpur University, who also stopped him from leaving the campus prompting West Bengal Governor Jagdeep Dhankhar to rush to JU along with a large police force. (Photo: PTI)

Kolkata/New Delhi: After being heckled by a section of students at Jadavpur University, Union minister Babul Supriyo said that he will not be provoked despite such incidents.

On Thursday, Supriyo tweeted: "I will not find anything that provokes me. The role of the opposition in keeping democracy alive is as important as that of the ruling party, and it is necessary to listen to the differences patiently. Such behavior is inappropriate and reprehensible.”

Governor spoke to the VC of #JadavpurUniversity & indicated to him that it was improper for him not to have taken prompt steps in the matter, that can lead to unwholesome results.This is a very serious reflection on the law & order of the state

Supriyo was on Thursday shown black flags and heckled by a section of students at Jadavpur University, who also stopped him from leaving the campus prompting West Bengal Governor Jagdeep Dhankhar to rush to JU along with a large police force.

The Governor, who is the chancellor of the university, too faced demonstrations by the students belonging to SFI, Left leaning AFSU and FETSU and AISA, a naxalite sudents wing and a few members of the TMCP, university sources said.

The students blocked his way and thumped the bonnet of his vehicle as the policemen kept requesting them to withdraw while the Governor was seen helping Babul Supriyo to the vehicle. Dhankhar and Babul Supriyo finally left the campus late in the evening hours after university teachers stepped in and persuaded the agitating students to lift their blockade.

The Trinamool Congress later criticised Governor Jagdeep Dhankar for his "partisan approach" in blaming the West Bengal government for the Jadavpur University fiasco, terming it "unfortunate and shocking" that he went to campus without informing the ruling dispensation.