India   All India  20 Sep 2018  UP couple, ‘mastermind’ in Rohingya trafficking, arrested in Manipur
India, All India

UP couple, ‘mastermind’ in Rohingya trafficking, arrested in Manipur 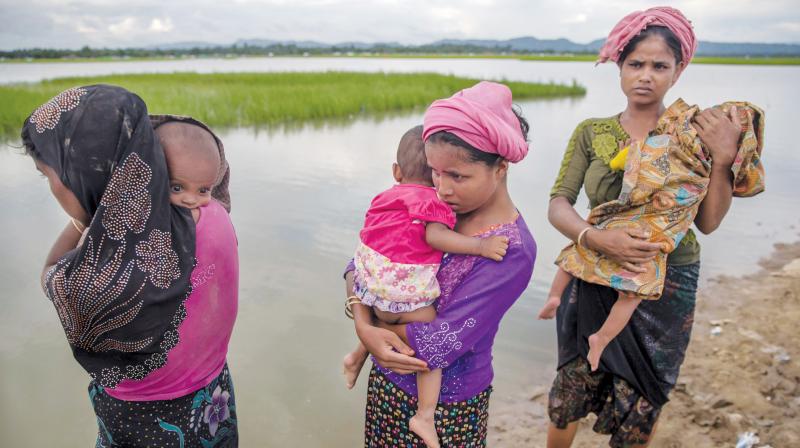 Imphal: Manipur police commandos on Wednesday arrested a couple who are allegedly the masterminds in the "trafficking" of Rohingyas from Myanmar into the state.

"The couple was involved in trafficking of four Rohingya muslims, including one woman in May this year", he said.

The couple has been absconding since May 1 and have been apprehended under sections of the Indian Penal Code, the SP said.

Ibomcha Singh, who supervised the operation, said that in May a person who was apprehended by the police in connection with trafficking of Rohingyas had confessed that at least six of them were brought into the state with the couple's help.

Some documents were also seized from the possession of the duo, he said adding that investigations are on to uncover the nexus and the related funding process.

The Manipur police are on the alert to apprehend Rohingyas who have entered the state illegally from the Indo-Myanmar border town of Moreh in Tengnoupal district and from Jiribam town in neighbouring Assam, he added.

In May, eight Rohingyas with forged documents were arrested from a rented house in Imphal's Hatta Golapati locality, police said.

Ethnic Rohnigyas have fled the Rakhine state of Myanmar since that country's army launched a crackdown on them following an attack by Arakan rebels on it and the police in 2016.

The crackdown led to massive displacement of the Rohingyas and their subsequent influx to Bangladesh and the north eastern states of Assam and Manipur, which share a porous border with Myanmar.

The Centre holds Rohingya Muslims in the country as illegal immigrants and that their continued stay posed serious national security ramifications.