India   All India  20 Aug 2021  IAF may resume evacuation of Indians from Kabul today
India, All India

IAF may resume evacuation of Indians from Kabul today

Minister S. Jaishankar told the UN Security Council that the terrorist Haqqani Network’s activities in Afghanistan were of great concern 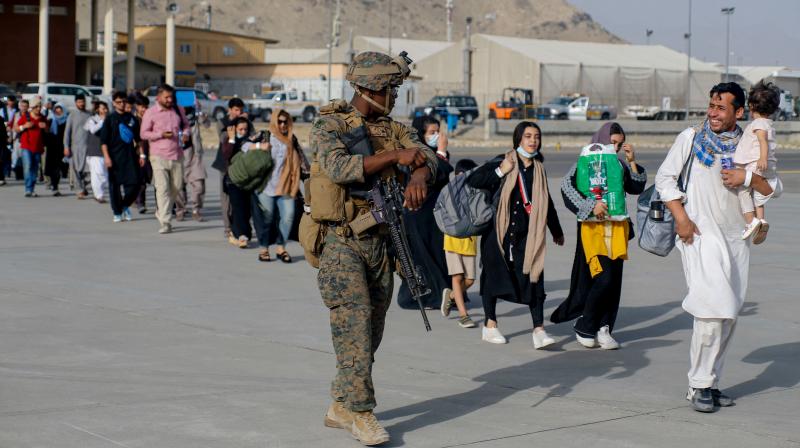 New Delhi: India may resume special flights by Indian Air Force C-17 Globemaster aircraft to Afghan capital Kabul as early as Friday to evacuate the remaining Indians stranded in the strife-torn country, sources said on Thursday, as external affairs minister S. Jaishankar told the UN Security Council Thursday evening that the terrorist Haqqani Network’s activities in Afghanistan were of great concern and that “some countries seek to undermine and subvert our collective resolve to fight terror” which cannot be allowed, a thinly-veiled reference to Pakistan, adding that “whether it is in Afghanistan or against India, (terrorist) groups like Lashkar-e-Tayyaba (LeT) and Jaish-e-Mohammed (JeM) continue to operate with both impunity and encouragement”.

Chairing an UNSC open briefing on “Threats to International Peace and Security Caused by Terrorist Acts”, the minister said that “what is true of Covid is also true of terrorism” and that “none of us are safe until all of us are safe”.

Given the ouster of the Afghan government and the Taliban takeover in Kabul, India’s assessment is learnt to be that “the rapidly deteriorating security situation in Afghanistan will only strengthen the terror organisations in the region” and that the “recent developments in Afghanistan are of grave concern” to India, which “continues to fight terrorist activities from safe havens and sanctuaries from across our borders”.

As far as evacuation efforts are concerned, it may be recalled that the IAF C-17 special flights evacuated Indian diplomats and security personnel from Kabul Tuesday and the government continues to look at the swift evacuation of all Indians stranded in Afghanistan as a top priority. The MEA had recently set up a Special Afghanistan Cell and had earlier told Indian nationals still stranded there or their employers “to urgently share the relevant details”. Some of these include Indian citizens who are employed by other countries and some are Indian academics teaching in Kabul.

At the UNSC, mentioning the terror attacks against India in the past like the 26/11 attacks in Mumbai in 2008, the Pathankot attack in 2016 and the Pulwama attack in 2019, Mr Jaishankar said: “Unfortunately, there are also some countries who seek to undermine or subvert our collective resolve to fight terrorism. That cannot be allowed to pass… In our own immediate neighborhood, ISIL-Khorasan (ISIL-K) has become more energetic and is constantly seeking to expand its footprint. This should be taken seriously. Events unfolding in Afghanistan have naturally enhanced global concerns about their implications for both regional and international security. The heightened activities of the proscribed Haqqani Network only justifies this growing anxiety. Whether it is in Afghanistan or against India, groups like the Lashkar-e-Tayyaba and Jaish-e-Mohammed continue to operate with both impunity and encouragement.”

The minister added: “It is, therefore, vital that this council does not take a selective, tactical or even a complacent view of the problems we face. We must never countenance sanctuaries for terrorists or overlook the raising of their resources. And when we see state hospitality being extended to those with innocents’ blood on their hands, we should never lack the courage to call out this doublespeak.”

Mr Jaishankar reiterated his eight-point action plan -- that was proposed in January this year -- to the UNSC that included summoning of political will, not justifying terrorism and not glorifying terrorists, no double standards and not making distinctions on terrorists, not placing blocks and holds on listing requests without any reason and supporting and strengthening global anti-terror watchdog Financial Action Task Force.