And interestingly, it is his son, the well-known dance scholar and critic Ashish, who re-introduced me to the collection. 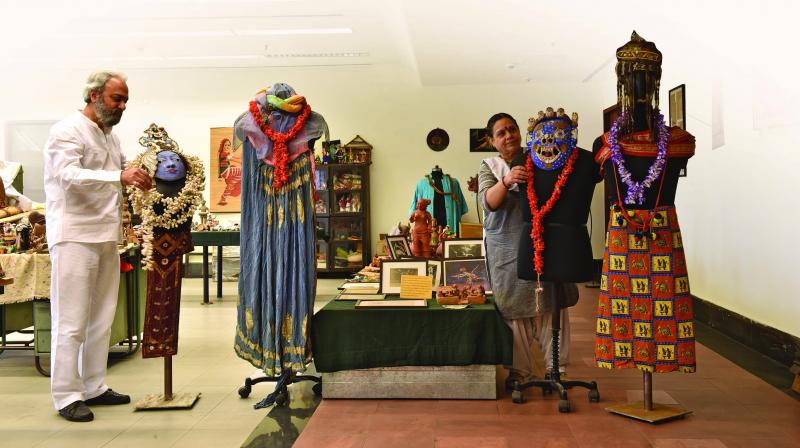 A team of four people are working in mission mode to unearth the treasures, sorting and sifting through 136 trunks and boxes, putting things in chronological order and making sense of the historical perspective of one man’s vision. (Picture Courtesy: IGNCA/MKDC)

It is like walking into a veritable treasure trove of dance. Practically anything that was even remotely connected to dance is there — from the Tiraseela curtain used in a Kathakali performance to a tin geometry box with a Nataraj printed on it to a plastic tray with a folk dancer on it, 108 Nataraj specimens from a Chola bronze to a sholapith one — it is all there tucked away in the imposing Indira Gandhi National Centre for the Arts (IGNCA) in New Delhi.

A team of four people are working in mission mode to unearth the treasures, sorting and sifting through 136 trunks and boxes, putting things in chronological order and making sense of the historical perspective of one man’s vision. The man was the dancer-scholar-arts administrator and a pioneering collector, Professor Mohan Khokar (1924-99). The plan is to design a permanent museum gallery to display a part of the collection in an interactive and contemporary manner — and to digitise the mammoth archives after sorting and indexing it.

For me, in a way, it was like coming full circle. I have a vivid recollection of meeting Mohan Khokar in the early 1990s and speaking to him about his passion that was almost the mission of his life — the Mohan Khokar Dance Collection (MKDC). And interestingly, it is his son, the well-known dance scholar and critic Ashish, who re-introduced me to the collection. He shares that passion with his father, who passed away in 1999. Ashish Khokar has not only grown up literally with the collection but has spent 30 years of his life looking after it, saving it, and understanding its sheer expanse. Needless to say, he made many professional sacrifices, including refusing plum postings abroad, choosing to stay in India and looking after and augmenting the collection. His mother, the Bharatanatyam doyenne and Guru M.K. Saroja, a Padma awardee herself and Ashish have donated and dedicated the collection to the nation, only because they felt India’s dance heritage and wealth ought to stay in India, and not sent abroad. The MKDC was sought by the Lincoln Centre, the New York Public Library, New York City and the Sweden Dance Museum in Stockholm, but the family chose to donate in keeping with collector’s wishes.

For me, as an arts journalist with a great fondness and interest in Indian classical dance, the vast collection is overwhelming to say the least. Comprising of over one lakh photos taken by Mohan Khokar from 1930 to the 1990s, when even a camera or film was a luxury import and nearly one lakh press clippings in several languages and even those publications that have ceased to exist now like the Illustrated Weekly or Surya magazine, covering a century-plus of Indian dance, 4,500 books on dance, 50,000 brochures, over a 1,000 artefacts; hundreds of posters, several costumes and even some personal effects of great dancers like Sitara Devi, Ram Gopal, Uday Shankar, Yog Sunder, Anna Pavlova, Gopinath, M.K. Saroja, Yamini Krishnamurti, Sanjukta Panigrahi and many other memorabilia and more is simply mind boggling.

“Art is bigger than the artiste and the collection has saved and celebrated each form, be it folk, classical or modern,” says inheritor-curator Ashish, who has looked after the collection like a modern day Shravan Kumar. The IGNCA has appointed him as a project head /adviser to make sense of this vast collection, which arguably only he can, given his pan India, academic and critical perspective, and of course the vantage point of having seen the collection grow since childhood to help join the dots. The family’s sacrifices to build and preserve the collection too are huge. “As children, we three brothers had one winter coat between us as father said books were more important to buy and all his paltry MSU, Baroda, or later, Sangeet Natak Akademi (Delhi) salary often went in that. So, we three could not attend functions or weddings together as there was only one coat between us to wear. I had holes in my canvas shoes in winter because newspapers were more important to buy. Our school fee was often late as father forgot to budget. I had to work in a sweatshop in the evening to pay for my college fee. We often slept on the floor as the beds were often occupied with the precious collection. My eldest brother passed his IAS allied exams in such conditions. Another brother became a top textiles scientist and another an events manager. Mother often joked, ‘What shall I serve for dinner? Books or magazines?’ I’m sharing this to illustrate what huge personal sacrifices and deprivation often go in building these collections. He was not a Maharaja to collect for indulgence but it stemmed from a deep conviction and belief in the arts of India.”

As Ashish walks me through the still in the process of opening the boxes and digitising the press clippings, he points out that many of the dancers themselves would not have kept their old brochures and press coverage as most didn’t possibly have a sense of historicity or documentation but the MKDC will have them and opens a random box and shows the systematic way the collection is being indexed so that it can be of use to scholars and researchers of dance, even filmmakers, critics and curators.

There is no facility in India which PhD or research scholars on dance can use for base material. Neither is there documentation of dance history in national akademies as they came up after Independence. Mohan Khokar was a visionary of sorts as he started collecting dance material in the 1930s. His camera went where few had been. That is why the Marg issues from the time he contributed as guest editor, remain seminal. His five definitive books, out of print at the moment, are still the best reference books. His over 5,000 articles from the 1940s to the 1990s are a slice of precious dance history. In that sense, his work is monumental. Its proper digitisation and dissemination is a priority.

The IGNCA holds 40-plus small and big collections — the three big ones known all over the world are: Elisabeth Brunner’s paintings collection; Anand Coomarswamy’s Indology collection and Mohan Khokar’s Dance Collection. Others that are in holding are Lance Dane artefacts; Shyam Benegal film books, Kapila Vatsyayan’s books and artefacts and Devi Swaroop’s literary collection, in addition now to Indra Nath Choudhury’s books, among many minor ones. While some have been split and sold or gifted to other prestigious organisations by the owners and to museums abroad including Anand Coomarswamy or Lance Dane, the Mohan Khokar Dance Collection is a donation in toto and exclusively with the IGNCA and like a veritable Kohinoor in the IGNCA’s crown.

The IGNCA was set up in 1987 as India’s premier multi-disciplinary art institution. Its mandate includes organising arts events and seminars, exhibitions and authors’ meets, with its main pillars being its library and cultural archives. “It was thanks to Dr Sachidanand Joshi’s sustained pursuit over a year and efforts of dance-connected trustees like Dr Sonal Mansingh, Dr. Padma Subrahmanyam and Dr Bharat Gupta that we were convinced the IGNCA in Delhi is the best place for this national dance treasure,” says Ashish Khokar. The MKDC is so huge that a minimum of three museum galleries can be made of it. If a photo gallery alone is set up — 100,000 photos — it would need a gallery a kilometre long! Its press clippings of a century-plus (1890-2010) will stretch to a two-kilometre gallery if put next to each other.

The IGNCA’s mandate to save heritage and culture is now its mission too. Dr Gaur, division head of the library and archives, is keen that this unique and rare dance heritage gets a pride of place and Dr Joshi, the cultured member-secretary of IGNCA, wants to create a first rate, interactive archives-cum-museum gallery for the MKDC and other important collections in its holding as pride of place , displayed for the nation at heart — for India.