The decision has been taken considering the damage caused by rains and floods this monsoon season, especially in last one week, in Kerala. 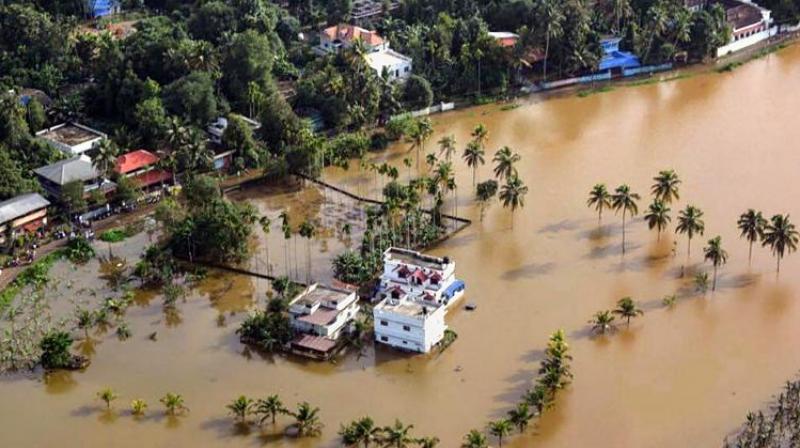 At least 216 people have lost their lives in the rains, floods and landslides in the state where over 7.24 lakh displaced people have been sheltered in 5,645 relief camps since August 8. (Photo: File | PTI)

New Delhi: The massive floods in Kerala have been declared a calamity of severe nature, the Home Ministry said on Monday.

"Keeping in view of the intensity and magnitude of the floods and landslides in Kerala, this is a calamity of a severe nature for all practical purposes," a home ministry official said. The decision has been taken considering the damage caused by the rains and floods this monsoon season, especially in last one week, in Kerala.

At least 216 people have lost their lives in the rains, floods and landslides in the state where over 7.24 lakh displaced people have been sheltered in 5,645 relief camps since August 8.

When a calamity is declared to be of 'rare severity'/'severe nature' support to the state government is provided at the national level. The Centre also considers additional assistance from the National Disaster Response Fund (NDRF). A Calamity Relief Fund (CRF) is set up, with the corpus shared 3:1 between Centre and state. When resources in the CRF are inadequate, additional assistance is considered from the National Calamity Contingency Fund (NCCF), funded 100 per cent by the Centre. Relief in repayment of loans or for grant of fresh loans to the persons affected on concessional terms, too, are considered once a calamity is declared "severe".

An inter-ministerial team led by AV Dharma Reddy, Joint secretary, Ministry of Home Affairs, had visited Kerala on August 8 to assess the damage caused by the rains and floods.

Another official said that an inter-ministerial team visits a state in view of any natural disaster; it automatically considers is as calamity of severe nature. Union Home Minister Rajnath Singh had visited the state on August 12 and declared an immediate assistance of Rs 100 crore to Kerala. Prime Minister Narendra Modi, during his visit to the state on August 16, had announced an aid of Rs 500 crore.

The central government has also decided to give ex-gratia of Rs 2 lakh each to the family of those killed in the floods and Rs 50,000 to the injured. The compensation will be given from the Prime Minister's Relief Fund.

The affidavit was filed in response to a petition for declaring the flood as a national disaster. In reply to a question in Parliament during the recent monsoon session, Minister of State (Home) Kiren Rijiju had also said that there is no provision, executive or legal, to declare a natural calamity as a national calamity.

The National Crisis Management Committee (NCMC), the country's apex body to handle emergencies, has been regularly monitoring the flood situation in Kerala. On Sunday, the NCMC had directed that focus should now be on provision of emergency supplies of food, water, medicines and restoration of essential services such as power, fuel, telecom and transport links as flood water recedes in Kerala. The Army, Navy, Indian Air Force and the National Disaster Response Force have been continuously engaged in rescue and relief operations in all the 14 flood-hit districts in Kerala.