The BJD saw the CBI inquiry into the chit fund scam as an act of vengeance by the BJP to settle scores with it for breaking the alliance. 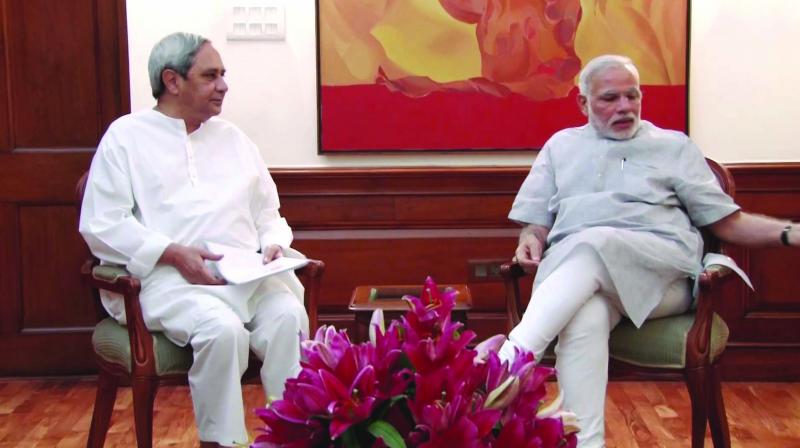 A file photo of Prime Minister Narendra Modi and Odisha chief minister Naveen Patnaik who spoke to each other before the election for Rajya Sabha’s deputy chairman.

Bhubaneswar: The BJD and the BJP are inching closer after the Naveen Patnaik, following PM Narendra Modi's request, extended support to the NDA nominee and JD(U) leader Harivansh in the election for Rajya Sabha’s new deputy chairman.

Just ahead of the 2019 Lok Sabha and Assembly polls in the state, Odisha politics has started moving towards an unexpected path as major political parties have changed their strategies to win the electoral battle.

The BJD which until a few days ago claimed itself as a non-aligned and neutral party, maintaining equidistance from the BJP and Congress, appears to be slowly getting closer to the BJP as the resurgent state Congress unit has started making serious bids to grab power.

In fact, the BJD and BJP shared a strong alliance from 1998 to 2009 until they parted ways in 2009 over seat-sharing for Lok Sabha and Assembly polls.

Although the BJD and BJP have been dismissing the possibility of a re-alliance to prevent the Congress from emerging in Odisha politics, a few recent developments have fuelled the speculation that both the parties are inching closer, much because of political compulsions.

Ideologically polls apart, the BJD and BJP had entered into an alliance in 1998 to oust their common enemy — the Congress — from power in the state. The coalition ran smoothly till 2009.

The Congress lay low all these years because of the lackluster leadership and intra-party bickering.

After its separation from the alliance, the saffron party filled the void of main Opposition. It literally dragged the BJD to the dock on chit fund scam, mining scam and a few other major corruption and governance issues.

The animosity between the BJD and BJP grew after the CBI took over the probe of chit fund scam following a Supreme Court order and rounded up nearly half-a-dozen BJD leaders, including a sitting Lok Sabha member and two sitting MLAs.

The BJD saw the CBI inquiry into the chit fund scam as an act of vengeance by the BJP to settle scores with it for breaking the alliance. Many of the BJD leaders went on to allege that the BJP leaders were indulging in politics of vendetta and tried to destabilise their party by “blatant misuse” of power. The enmity between the two turned bitter after the latter catapulted itself to the second position in the rural polls held in February 2017.

However, equation between the BJD and BJP appears to be changing after the BJD members refrained from participating in the no-confidence motion brought against the Narendra Modi government in the Lok Sabha on July 19 this year.

While the Opposition hoped the BJD would go with them as it had turned an avowed rival of the BJP, the latter’s stand on the motion baffled them.

Political pundits have started predicting that since the BJP is going to lose a crucial number of seats in northern and central parts of the country, it would try to woo some allies in the east so as to compensate the loss.

And in Odisha, the BJD would most likely go with the saffron party mainly for two reasons — as it (BJP) is a strong non-Congress platform and secondly, ties with the latter would not make any dent to its vote bank.

There are theories going on that apart from political considerations, the BJD has also a compulsion to support the BJP to protect its leaders whose names have figured in the multicrore chit fund scam. Many of the BJD leaders have also faced CBI questioning.

Meanwhile, the Congress under the new state chief Niranjan Patnaik has also started looking for potential leaders who have grouses against the BJD and BJP state leaderships so that it can welcome them to its fold and strengthen its own ranks. The grand old party’s strategists feel that the only way to prevent the BJD and BJP from entering into a fresh coalition is to destablise them by poaching their potential leaders. The changing political scenario in Odisha would be clearer once the Monsoon Session of Assembly begins next month and reveals the BJD-BJP plan.