As the ashes were immersed into the river, an emotional Namita leaned against the shoulder of her husband. 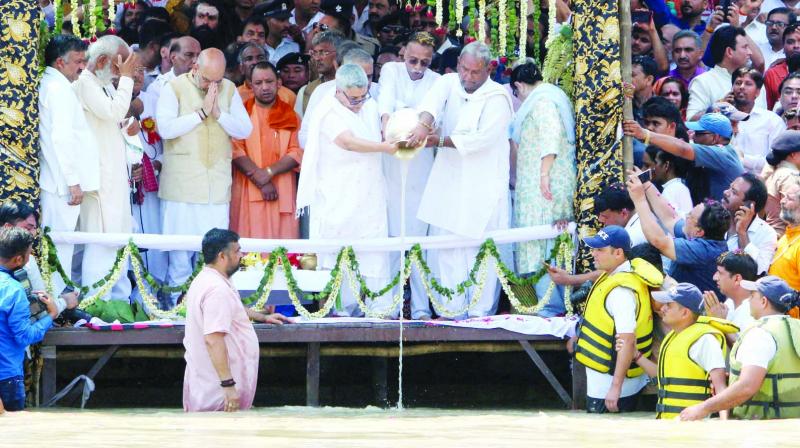 Lucknow/Hardwar: The ashes of former Prime Minister Atal Behari Vajpayee were immersed in the Ganga on Sunday at Har ki Pauri in Hardwar by his family members amid the chanting of Vedic hymns with thousands joining in as the urn was carried in a flower-bedecked truck.

At Har ki Pauri, the urn was carried by Vajpayee’s foster son-in-law Ranjan Bhattacharya, accompanied by the former PM’s adopted daughter Namita Kaul Bhattacharya. A platform was especially erected at Brahmakund below the stairs leading to the river where the rituals were performed under the supervision of “teerth purohit” Akhilesh Shastri.

As the ashes were immersed into the river, an emotional Namita leaned against the shoulder of her husband.

Earlier, people could be seen on balconies and rooftops to take a glimpse of the urn being carried in the truck. They showered flower petals on the vehicle. It was during Vajpayee’s prime ministership that Uttarakhand got statehood in 2000. As Prime Minister, Vajpayee also ensured the newly-created hill state got a special status to facilitate its speedy industrialisation and growth.

Cries of Atalji amar rahein, Jab tak suraj chand rahega, Atalji ka naam rahega and Vande Mataram rent the air as the convoy passed through the lanes. The rituals lasted around 20 minutes as a huge crowd waited at ghats on either side of the river. Elaborate security arrangements were made from Jolly Grant Airport to Har ki Pauri in view of the VIP movement along the route, with over 1,000 police and PAC personnel deployed to keep vigil.

Earlier, Vajpayee’s family members and the BJP brass arrived at the Bhalla College ground with the former PM’s ashes and left for the Ganga riverbank. There were reportedly some differences among party leaders over the place from where the “kalash yatra” (procession of the urn containing ashes) should start. It was decided that the procession would begin from the Bhalla College ground.

In Lucknow, a senior BJP leader said after the ashes are brought to Lucknow, they would be sent to other districts for immersion in holy rivers across the state. UP BJP chief Mahendra Nath Pandey said a minister and a senior party functionary will be part of the “kalash yatra” in different districts. “Mr Vajpayee had a long association with Lucknow. It was his emotional karmbhoomi”, he added.

The BJP has decided to hold an all-party “Shraddhajali Sabha” to pay homage to Vajpayee at Jhule Lal Park on the banks of the Gomti river on August 25. The party will be sending invitations to the chiefs of all political parties, including Samajwadi Party, BSP and Congress, to attend the sabha. Later, the party will organise prayer meetings in all districts on August 25.